A tale of two hat-tricks 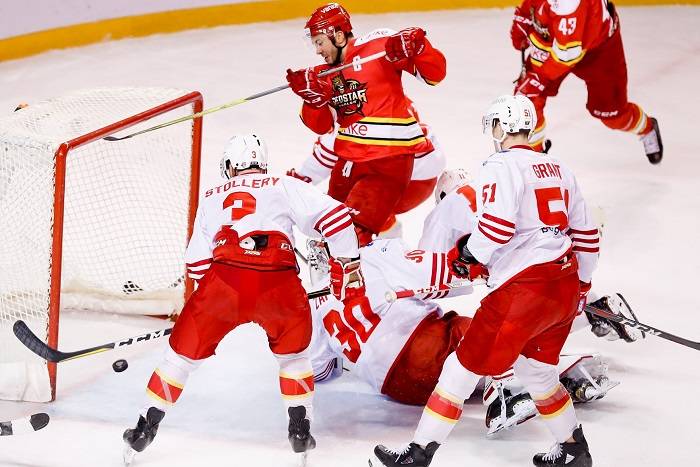 Drew Shore clearly finds playing in Shanghai to his liking. On his Red Star debut here, he got a goal and an assist in our win over Admiral; returning after his first road trip with the team, he blasted a hat-trick against Jokerit. The American center joins Brandon Yip and Olli Palola in Red Star’s treble club. His team-mates scored hat-tricks of their own back in November, becoming the first players in the organization’s history to do so.

Sadly, though, Shore’s scoring feats were not enough to avenge our 3-6 loss in Finland at the start of the season. And, for the second time in this campaign, Sakari Manninen had a big say in that. Jokerit’s forward scored twice on us back in September and went one better with a hat-trick of his own here. And, not for the first time, a second-period slump proved costly for Kunlun.

Neither team was wasting time at the start of this one. Jokerit grabbed the lead in the fourth minute through Manninen, but Red Star tied the scores while the TV was still showing replays of the opener. Ondrej Vitasek shot from the point and Shore was between the hash marks to redirect the puck beyond Ryan Zapolski. The game remained finely balanced throughout the opening stanza, with Kunlun creating chances and matching Jokerit for possession despite falling behind to a Sami Lepisto goal midway through the frame.

Once again, it was the second period that really killed Kunlun’s chances. Two more Manninen goals in the space of eight minutes took us from a tight encounter to a game where Jokerit enjoyed a comfortable lead. It wasn’t that the performance levels dropped – the stats show that the teams were still evenly matched – but the visitor’s finishing was clinical, making the most of its chances, while Zapolski produced some good form in the Jokerit net.

“We lost too many pucks in the neutral zone and they turned them over fast,” said head coach Jussi Tapola after the game. “We couldn’t get our rhythm going. Again, we recovered and won the third but what happens in the second period is our biggest issue.”

One thing Red Star has never lacked this season is spirit. No matter how difficult the situation, the guys always fight to the end. And the third period produced a brave attempt at a fight back with Shore in the vanguard. In the 49th minute he pulled a goal back, shooting home from the deep slot as Jokerit struggled to get the puck out of its zone. Five minutes later, Shore had his hat-trick. Vitasek went deep and fed Tomas Mertl from behind the net. The Czech forward fanned his shot, turning it into a perfect pass for Shore at the back door. Between those goals, though, a John Norman strike for the Finns kept clear blue water between the teams.

Even so, there were chances to force a tie. Sam Lofquist, our prolific blue-liner, flashed a trademark shot from the blue line narrowly wide before fellow D-man Ville Lajunen drew a big save from Zapolski as he looked to score on his former club. However, Jokerit managed to see out the game as our ‘win one, lose one’ sequence continues.