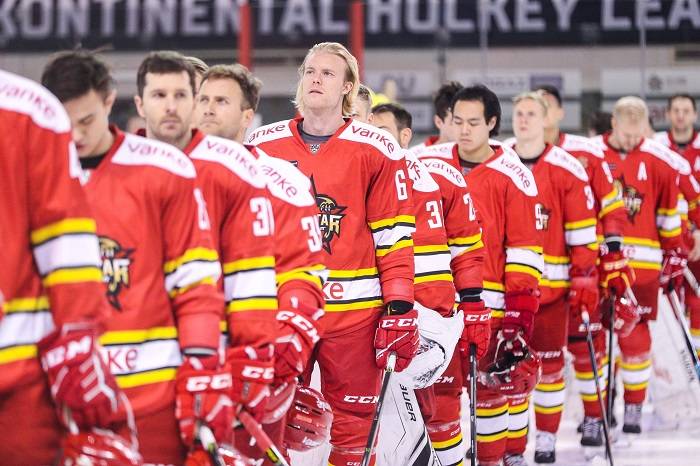 The closing stages of the regular season finally see an end to those long trips out West. From now on, our remaining road games take in our Chernyshev Division rivals while nine of our last 15 games will be played at home. That sequence starts with three visits from teams from the Western Conference. Can Brandon Yip and Sam Lofquist keep up their impressive scoring streaks (both players are on seven points from five games)? Is Drew Shore’s two-point home debut a sign of things to come? And can home advantage help to lift us back into those all-important playoff places?

Last time out: We began our season in Helsinki back in September. Debut goals from defensemen Victor Bartley and Marc-Andre Gragnani could not prevent a 3-6 loss.

Familiar faces: Jokerit’s Max Warn scored 17 (10+7) points in our debut season, adding a further assist in the playoffs. Unfortunately, he is on the injured list at the moment. Among our Finnish contingent, defenseman Ville Lajunen had three seasons in the KHL with Jokerit, making 173 appearances for 69 (26+43) points.

Background: There have always been strong connections between Red Star and Finland and the current roster is no exception. Led by a Finnish coaching staff, and seasoned with Finnish players, the 2019 line-up continues to get attention among hockey fans up in the north. Historically, Jokerit has had the upper hand in head-to-head meetings, with Red Star’s only win coming almost exactly two years ago with a 6-3 home success. However, the visitor has not impressed in 2019: back-to-back home losses against SKA and Dynamo Moscow have pushed the team back into a tight battle with Lokomotiv for third place in the Western Conference.

Danger men: Kristian Vesalainen, a 19-year-old Winnipeg prospect, returned to his native Finland to get game time and has responded with 12 points in 16 games to confirm his status as a star of the future. Danish forward Niklas Jensen has been among Jokerit’s leading scorers in recent games with 4+1 in his last five outings.

Last time out: In the midst of an injury crisis, Red Star battled bravely in Cherepovets on December 7. Brandon Yip’s late goal forced overtime, but the host got the verdict thanks to Vladislav Kodola’s winner.

Familiar faces: Defenseman Arturs Kulda, who got Kunlun’s winner last time Severstal came to China, joined the Steelmen back in the summer.

Background: It’s been a tough season for Severstal but a shake-up of the squad in the run-up to deadline day (a shake-up that saw former Red Star forward Oleg Yashin among those who left) has made an impact. Under new head coach Andrei Razin the Cherepovets team is undefeated in 2019, picking up a third successive victory thanks to Igor Geraskin’s late goal in Ufa at the end of a nine-goal thriller. That’s the team’s best run of form this season and has hoisted clear of the Western Conference basement.

Danger men: Apart from getting the gamewinner on us last time out, Kodola has three goals in his last five games as the 22-year-old enjoys something of a breakout season in the KHL. Geraskin, another youngster, continues to catch the eye, while the experienced Yury Trubachyov leads the club’s scoring alongside Vasily Demchenko.

Last time out: Justin Fontaine’s goal earned a 1-1 tie but Daniil Apalkov gave Lokomotiv a shoot-out win at the start of the December in a game dominated by the two goalies.

Familiar faces: Our goalie, Alexander Lazushin, made his first KHL appearance for Loko back in 2010. After just nine appearances, though, he moved on to Metallurg Novokuznetsk.

Background: More than most, Lokomotiv was impacted by the recent World Juniors. Grigory Denisenko, Nikolai Kovalenko and Kirill Slepets were all among Valery Bragin’s bronze medallists in Vancouver. In their absence, Loko’s game wobbled a little. Dmitry Kvartalnov’s team scored just four goals in its last five games – although the excellence of goalie Ilya Konovalov secured three wins, two of them by 1-0 scorelines. The youngsters may not be among Loko’s scoring leaders but the energy they bring to the team has played a big role in keeping Yaroslavl close to the top of the Western Conference.

Danger men: The recent scoring slump coincided with the end of Andrei Loktionov’s hot streak, while Brandon Kozun (three points in the last five games, 27 for the season) has been the most prolific player recently. But the star of the season for Loko has undoubtedly been 20-year-old Konovalov who works with our former goaltending coach Jaakko Valkama. Seven shut-outs and a GAA of just 1.89 – that’s why the youngster has taken over Alexander Salak’s role as starting goalie.