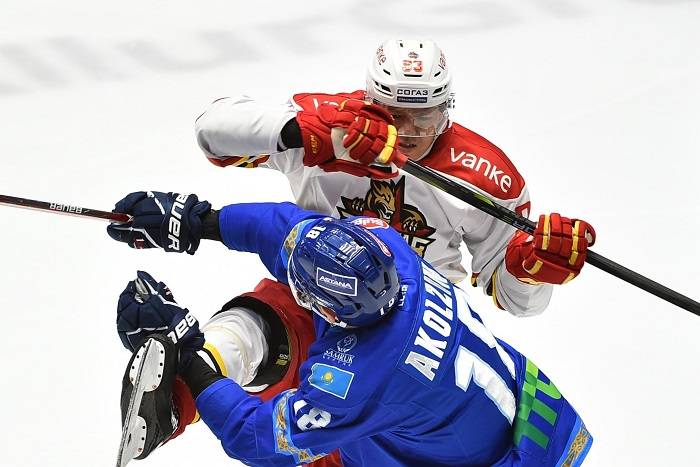 Days like this make it all worthwhile. Red Star picked up its first ever victory in Kazakhstan, putting a big dent in our opponent’s bid to win the Chernyshev Division and turning the formbook upside down in the process. Captain Brandon Yip led the from the front with two goals, Sam Lofquist picked up his seventh point in six games for the club and Martin St. Pierre got among the points against his former club. Then there was Tomi Karhunen, criticized in some quarters after the loss in Ufa last time out but excellent here as he made 32 saves against a powerful Barys offense.

Prior to the game, everyone understood that this Barys team was stacked with scoring potential. But we also knew that there was a weakness in the home defense if we could exploit it. And, after allowing the Kazakhs to strut their stuff early on with a goal after 39 seconds, Red Star got stuck into the task.

Step one had to be containment and frustration. Head coach Jussi Tapola acknowledged that this wasn’t a game for us to play pretty hockey; it was about defending hard and grinding out chances at the other end when we could. The offensive power of the opposition meant that, inevitably, there would be plenty of play around our goal. In the event, Barys had 70 attempts on goal in 60 minutes – but saw 20 of them blocked and found Karhunen ready to deal with the ones that got through to him. It was an unyielding defensive display that involved every player – forwards and blue liners alike – in holding off the home forwards.

Putting that kind of squeeze on a team used to scoring goals tends to generate frustration. Frustration often leads to penalties, and that offered Kunlun a way back into the game. Matthew Frattin took the first call of the game and Red Star turned it into a goal. Neat interplay between Lofquist and Justin Fontaine unpicked the home PK and Patrik Lundh fired home an 11th-minute equalizer. A couple of minutes later, Red Star was on the PP once again after Viktor Svedberg was sent to the bin. This time, St. Pierre fed Ville Lajunen on the blue line and the Finn’s shot was too hot for Henrik Karlsson to handle. The puck popped up in front of the net and Yip pounced to make it 2-1 for Kunlun. Two power plays, two goals: not bad for a team languishing in the lower reaches of the conversion charts with a moderate 13.6% success rate over the course of the season.

The second period was goalless and, significantly for Barys, went off without any more penalties. The home team doubled down in its quest for an equalizer, spending twice as much time on the attack and firing in almost twice as many shots. A pattern was emerging: Barys was probe for a shooting lane, Red Star would diligently shut it down.

Into the third period, and that sequence of play intensified. Of 23 attempts on our net, only six forced any kind of save from Karhunen. This was defense at its best, harrying and hustling, taking the space away from the opponent and demanding something exceptional to break through and tie the game.

Barys could not find a solution. Instead, with 13 seconds left and Red Star shorthanded against six opposing skaters, Yip picked up the puck following a face off in his own zone. Now, the Barys power play became a liability: with the net unguarded, Yip could risk taking a shot knowing that even if he missed the target there would be no icing. Not that there was ever a danger of our captain’s aim going askew: the disk found its mark, Red Star was up 3-1 and the win was secure.

Victory in Astana keeps the team two points behind Traktor in the last of the playoff spots. December’s run of tough results has been replaced by a more encouraging sequence of ‘win one, lose one’ in the New Year. Now there’s a long run of home games: three against visitors from the West, followed by double headers against Salavat Yulaev and Avangard. The endgame approaches – and Red Star is well placed to achieve its first target for the season and break into the playoff picture.