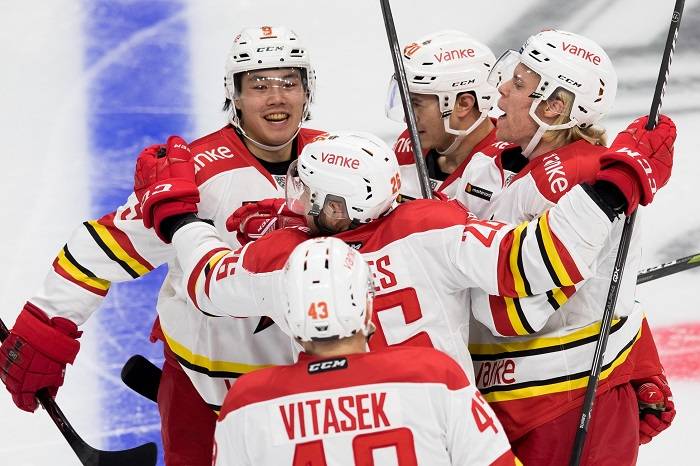 The curse of the second period struck again as Red Star went down to another high-scoring defeat in Ufa. Recent games have seen too many bright starts squandered midway through the game and this was no exception. Leading 2-1 at the first intermission, and 3-2 early in the middle session, Kunlun subsided and went into the second break down 3-5. From there, it was always going to be a long way back and, just as in the teams’ previous meeting on December 28, the points went to Salavat Yulaev.

“The start was hard for us – we took a penalty and allowed an early goal – but we got ourselves back in the game and even went into the intermission in front,” said head coach Jussi Tapola. “But then in the second period we ran into problems once again.

“It’s a general issue about how we play on offense and defense. Moreover, we gave up two goals when we had a 3-on-2 attack, lost the puck and got hit on the counter. That’s the root of our problems.”

Despite the unhappy outcome, there were several bright spots compared with our 0-5 loss here 10 days earlier. The December game was over by the end of the first period, with Red Star 0-3 down and out of contention. Here the game was very much alive until a blast of three goals in three minutes late in the second period handed our host a decisive advantage.

Sam Lofquist’s contribution was another bright spot. Our recently-signed defenseman continued his productive start to life in China with two goals and two assists. The first of those helpers contributed to Chris Seto’s first ever KHL marker in his seventh game for Red Star. The 21-year-old planted himself in front of home defenseman Anatoly Yelizarov to redirect Lofquist’s point shot past Juha Metsola to cancel out an early power play goal from Linus Omark as the game got off to an action-packed start.

It wasn’t long before Lofquist had his first goal of the night to put Red Star in front, smashing home a one timer from long range after a quick break-out from defense. And, moments later, the American came close to completing a Gordie Howe hat-trick when he and Grigory Panin got as far as losing their helmets before the officials intervened to prevent a full-blown fight. A goal, an assist and a skirmish – all done by 12:06.

There was even better to come early in the second period: Martin St. Pierre’s sizzling diagonal feed found Lofquist at the far post and his emphatic finish restored our lead after Vladimir Tkachyov’s equalizer moments earlier.

Unfortunately, that proved to be the high-water mark. It all started to go wrong in the 34th minute when Pyotr Khokhryakov made it 3-3. A couple of minutes later, Teemu Hartikainen put the puck in the net. Our bench immediately appealed for offside, but the officials rejected that claim and Red Star took a minor bench penalty. Salavat Yulaev duly converted that power play as Anton Burdasov made it 5-3.

“That fourth goal was the key moment,” added Tapola. “We questioned if it was offside or not, took a penalty and conceded another goal. That was the difference between 3-3 and 5-3, and against a team like this it’s hard to play when they get that sort of lead.”

From that point on, the game was up. Hartikainen struck again early in the third – four goals in two games against us for the Finn – and Khokhryakov wrapped up the scoring with a late power play goal. In between, there was time for Lofquist to impress again when he initiated a rush from deep in our own zone and rejoined the play in time to set up Olli Palola for Red Star’s fourth of the game.