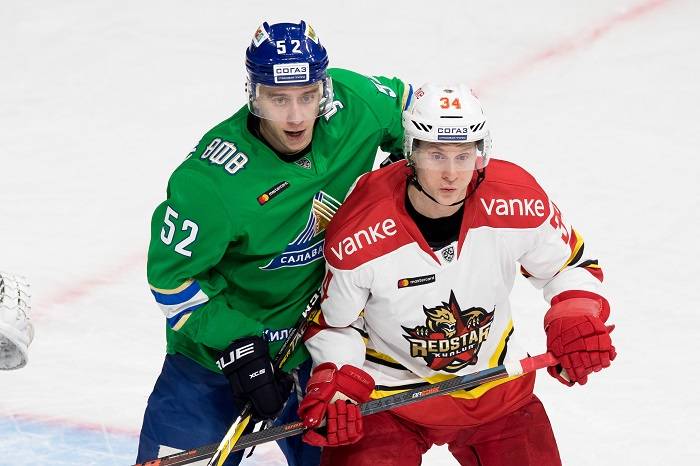 Lifted by victory over Admiral and boasting a secret weapon in the form of new signing Drew Shore, Red Star hits the road again with vengeance in mind. First we go to Ufa eager to put the record straight after last month’s heavy loss against Salavat Yulaev. Then it’s on to Astana and a bid to atone for the 1-4 defeat inflicted by Barys earlier in December.

Last time out: It wasn’t pretty. Our trip to Ufa just before Christmas saw Kunlun go down punching – literally – in a game that produced 136 penalty minutes. Sadly, we couldn’t lay a glove on the opposition, though, losing 0-5.

Familiar faces: Oskars Bartulis finished last season with Salavat Yulaev, making 10 regular season appearances and four more in the playoffs. He scored one assist in that spell, but is likely to miss out on a return to Ufa due to injury. A year earlier, Tomas Mertl’s season followed a similar pattern when he arrived in Bashkiria from Medvescak. Mertl, too, played 10 regular season games, with five more in the playoffs. He had 5 (4+1) points.

Background: Historically, Red Star has impressed against Salavat Yulaev. Unfortunately, that counted for little last time out in a game that we’d love to have back. And here’s a chance, right away. However, Ufa has become a tricky place to visit: since beating us 5-0, Salavat Yulaev has also handed a 6-1 drubbing to Sibir. Apart from the battle to win a hockey game, there are a few intriguing sub-plots here as well: the previous game saw fights between Lucas Lockhart and Maxim Rybin, and Michael Latta and Stanislav Gareyev, plus bits of sparring elsewhere. How much of that bad blood will carry over to the next meeting?

Danger men: There are concerns about the health of goalie Juha Metsola and defenseman Philip Larsen, both of whom are recovering from illness and missed the game against Sibir. But forward Anton Burdasov is available again after suspension, while Finnish duo Teemu Hartikainen and Joonas Kemppainen have been in good form lately. Hartikainen scored twice against Red Star last time, Kemppainen potted his first KHL hat-trick in Sunday’s thrashing of Sibir.

Last time out: Barys eased to a 4-1 victory in Shanghai during our sticky spell in December.

Familiar faces: Defenseman Jesse Blacker moved from China to Kazakhstan in the summer. The 27-year-old Canadian has 11 (2+9) points in 36 games this season. In our camp, Martin St. Pierre is set to return to the club where he picked up 24 points in 30 games last season.

Background: Barys comes into the game in impressive form. The Kazakhs won four out of five following a home defeat to Lokomotiv on December 20, and only lost out to Avangard in overtime in the fifth game. That result kept Barys away from the leadership of our Chernyshev Division, although it has five games in hand on Avangard. However, there is a weakness in the team: with 111 goals allowed in 44 games this season, Barys has the defensive numbers of a team locked in a battle for the playoffs, rather than duking it out for a seeded spot in post-season. Whatever the outcome, this game is unlikely to be low scoring.

Danger men: Defenseman Darren Dietz went on a five-game productive run that yielded two goals and five assists prior to Tuesday’s game at home to Amur. He also got an assist when Barys won 4-1 in Shanghai last month. That kind of form has lifted the 25-year-old Canadian to 43 points for the season, well ahead of the leading forwards Roman Starchenko (32) and Andre Petersson (31).