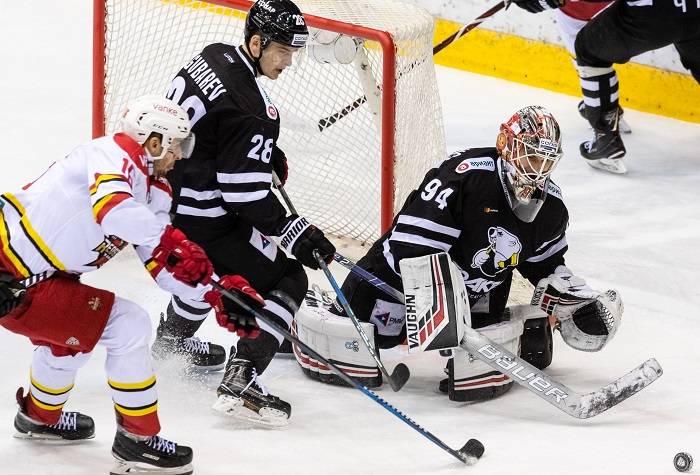 The final game of 2018 was a big one – and brought a big win for Red Star. Away at a Traktor team immediately above Kunlun in the table, this was a game that could determine the course of the latter stages of the season. Victory would put us just two points outside the playoff places, tipping the momentum towards our guys as Traktor’s indifferent run continued; defeat would stretch the gap between us and post season to six points – three games – ramping up the pressure into the New Year.

After a run of five losses, it was also crucial for Red Star to finish the year on a high. The preparations for the game were disrupted by the efforts to get new signing Drew Shore eligible to play – sadly, the paperwork could not be completed in time and the former NHLer will have to wait until January before making his debut. However, there was little sign of any disruption in a strong first period that produced everything except a deserved goal despite testing attempts from Tomas Mertl, Joonas Jarvinen and, seconds before the intermission, Justin Fontaine.

By contrast, the second stanza saw Traktor get a foothold in the game with Red Star limited to just four shots on Vasily Demchenko’s net. Crucially, though, one of them was successful. Ville Lajunen fired home his ninth goal of the season, collecting a Jarvinen pass and stepping up to the top of the right-hand circle before whipping a wrist shot past the home goalie. The closing seconds almost brought another goal after Wojtek Wolski had the puck in the net only for the officials to rule that Brandon Yip had impeded Demchenko in a scramble on the slot.

As a result, it was not until late in the third period that Patrik Lundh made the game safe, firing into an empty net from the red line after Lajunen broke up a Traktor attack and cleared the puck. The victory was greeted with a combination of delight and relief – after a miserable run of results in December, there is now real hope that a corner has been turned.

“We started the game very well and the first period was ours,” said head coach Jussi Tapola. “By contrast, the second period was Traktor’s. Here, [Alexander] Lazushin was excellent and kept them out of our net. In the third period the game was more or less even but we were less nervous and it was good that we finally managed to win.”

Tapola’s comments reflected another big day for our goalie, Lazushin. He made 23 saves to record his fifth shut-out of the season; that’s his best return since four seasons ago with Dynamo Moscow in a campaign that took the Blue-and-Whites to the playoffs.  Lazer added two more shut-outs in post season; his form this time around gives us every hope of more playoff action.

Thus 2018 came to an end with Red Star just two points and one place outside the playoffs. Moreover, with 15 wins in regulation against 11 for Traktor, a tie on points would go in our favor. Behind us, Sibir’s recent resurgence has lifted out Chernyshev Division rival into the race while Neftekhimik’s hopes were hit by a defeat at Ak Bars that puts Nizhnekamsk team two games back having played twice more.

The decisive phase of the regular season is already upon us. After a short New Year break, our 2019 campaign starts in Shanghai on Thursday at home to Admiral. The mission to reach the playoffs continues and, as today’s game shows, our players are more than up for that challenge.