Going down with several fights 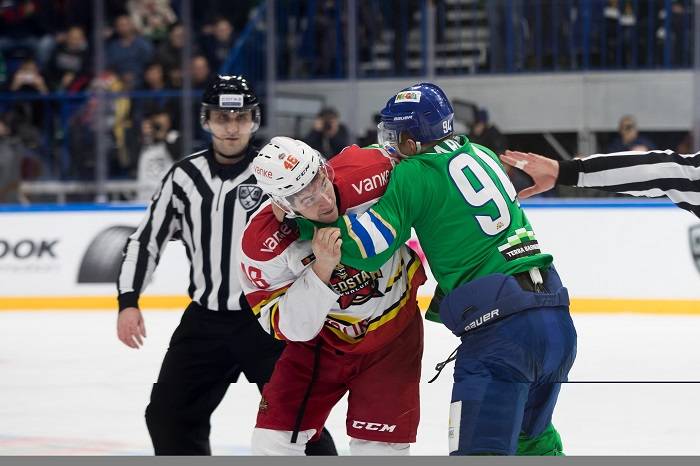 A lopsided final scoreline in Ufa only tells part of the story of this game. In addition to the five goals scored, the teams shared 136 penalty minutes in a clash that saw three players sent to the locker rooms early amid a string of clashes.

For Red Star, this was something of a Christmas hangover without the Christmas party. While the Western world was tucking into the turkey, China and Russia holds fire and saves its celebrations for New Year (in China’s case, both the global Jan. 1 version and the old, traditional Chinese New Year in late January). So, without a Christmas celebration to slow the team down, a disappointing first period in Ufa might be best explained by jetlag.

That’s not to say the previous couple of days had not been busy. The departure of Taylor Beck, signed by Avangard on trade deadline day, disrupted the squad; the welcome addition of defenseman Sam Lofquist is only part of the new-look roster for 2019. Lofquist, signed on Christmas Day, made his debut here against Salavat Yulaev. Two more new faces are set to join us next month when Martin St. Pierre and Drew Shore arrive to strengthen the offense.

That encouraging prospect offered some consolation during a first period in Ufa that was one to forget. An early ‘too many men’ penalty on Red Star gave Salavat Yulaev a chance to draw first blood … and the predatory pairing of Linus Omark and Teemu Hartikainen duly delivered. Barely a minute later, Maxim Mayorov doubled the lead. It was starting to feel like a long evening in prospect. To Red Star’s credit, heads did not drop. The game stats for the first period show that we matched the opposition in terms of time on offense and chances created. However, there was a big blank next to our name in the stat that really matters. The home defense stood up strongly to the pressure Kunlun was applying and a difficult evening got worse late in the frame when Vladimir Tkachyov added a third.

Next came a bit of a brawl. Maxim Rybin piled in with a late hit on Tobias Viklund, infuriating Lucas Lockhart. Our man took the fight to Rybin, dropping the gloves and trading blows in center ice. Lockhart got a five-minute penalty for his pains, Rybin was handed two majors (one for the hit, one for the fight) and a game exclusion.

Sometimes, a ruckus like that has a galvanizing effect on a team. Seeing a team mate step up in defense of a colleague is always a motivating factor, a reminder that we’re all in it together. And the second period went better than the first, at least in as much as there were no more goals on us. The downside, though, was that there were still no goals at the other end.

In the third period it became increasingly clear that this was not our day. Another home player, Pyotr Khokhryakov, got a major penalty but luck was not with us. A disallowed goal was followed by a short-handed marker for the host after Vladimir Zharkov fired into an empty net. The gamble on withdrawing Tomi Karhunen to try to force a way back into the game backfired. In the aftermath of the goal, Zharkov clashed with Lofquist and a bad-tempered encounter saw one more flashpoint when Michael Latta and Stanislav Gareyev squared up. Both players earned majors, while Ville Lajunen was ejected from the game for misconduct in the same incident. A late goal for Hartikainen completed the scoring and rounded off a miserable day on the road.