Plenty of fight, but more frustration 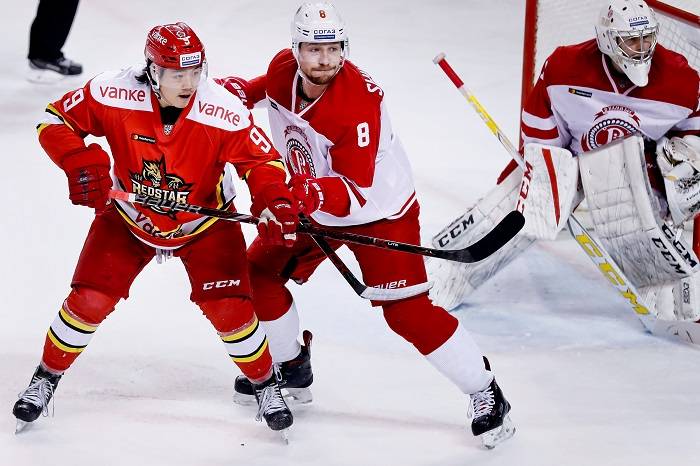 It was another frustrating day for Red Star as, once again, our guys gave up a lead and suffered a narrow loss. Not for the first time, there were encouraging signs in the team’s performance but the end result fell just short.

“We came into the game well, we had good chances, especially early in the game, our game plan was good and so was our effort,” said head coach Jussi Tapola. “We scored the first goal and kept going, but we lost a little bit of momentum in the second period.”

During the first period, Kunlun looked the stronger team. When both sides were at full strength, the pattern of play definitely favored the host; the better Vityaz chances came on the visitor’s power play. The action on the ice did not reflect that our opponent arrived on the back of a five-game winning run, while Red Star had struggled for points throughout December.

Red Star got ahead in the 15th minute, a deserved reward for that positive start to the game. A point shot from Ondrej Vitasek looped up over Joni Ortio before Greg Squires and Michael Latta got to the net and managed to bundle it over the line. Latta ultimately claimed the goal, holding off the challenge of Evgeny Katichev to apply the vital touch and get his second in three games.

However, towards the end of the opening session, some of those disciplinary problems returned. Penalties on Alexander Lazushin and Joonas Jarvinen in the closing minutes of the session slowed our progress. It’s a problem that has haunted the team all season: with 484 penalty minutes so far, Red Star is the eighth most penalized team in the KHL. Even though Kunlun’s PK is also in the top 10 for the league, the strain placed on a defense that has been left short of numbers due to injuries often proves costly.

And so it proved here. The momentum gained in the first period faded before the intermission; the second session started on the PK and Vityaz was able to get a foothold in the game. Red Star continued to battle but could not prevent the visitor tying the scores through Yegor Voronkov in the 37th minute.

Vityaz got in front in the 48th minute with another goal from a defenseman. This was a play that typified Red Star’s luck. Pushing forward in an effort to regain the lead, Kunlun lost possession in the visitor’s zone and was rocked by a swift counter. Out of position, the home D drifted towards the puck, leaving Alexander Yevseyenkov open in the right channel. Denis Kokarev’s pass cut through the defensive line, Yevseyenkov fired and a cruel deflection off Taylor Beck’s leg robbed Lazushin of any chance of stopping the puck. That’s the kind of misfortune that afflicts a team on a difficult run, and the type of kindly bounce that seems to favor a group on a winning streak.

The Dragons attempted a final storm on Ortio’s net and there were shooting opportunities for Victor Bartley and Tobias Viklund that caused concern for the Finnish goalie. However, the saving goal never came and instead it was Nikita Vyglazov’s empty net effort that sealed a sixth straight win for Vityaz.

The result leaves Red Star in ninth place, just outside the playoff places. The Dragons are in action once again on December 25 when SKA comes to Shanghai.