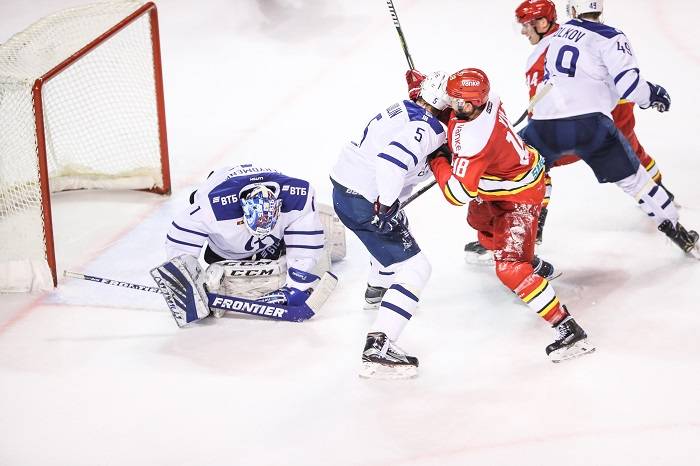 It should have been a day for Zach Yuen to celebrate. Our versatile Chinese player, something of a poster boy for the sport in this country, made his 100th appearance in the KHL regular championships for Red Star. Having been with the club from the very start, he’s not merely the all-time appearance leader among Chinese players in the league, he’s also second only to Joonas Jarvinen on Red Star’s appearance list. Along the way he’s had some high impact moments: the first of his countrymen to score points and goals at this level, a trailblazer showing that hockey is not exclusively the preserve of those whose roots are buried under generations of Canadian, Scandinavian or Russian snow.

Today, once again, Yuen had a profound impact on the game. Unfortunately, though, it was the kind of impact that he’d sooner forget. Midway through the second period he was ejected from the game. The subsequent major penalty proved pivotal. Dynamo tied the game and the home PK ended up exhausted by its efforts to keep the opposition at bay. A third, decisive goal for the visitor came late in the middle frame and despite a brave effort in the final stanza there was no way back for Kunlun.

The frustration was intense. Having never previously beaten the Muscovites, Red Star killed some early penalties and promptly jumped to a 2-0 lead. The first came after 10 minutes: Justin Fontaine danced into the danger zone from out on the boards and produced a perfect feed for Wojtek Wolski to rifle home a one-timer. Two minutes later it was 2-0, with Fontaine involved again. This time, the Canadian won the puck on his own blue line and set off on the counter-attack with Patrik Lundh in support. Fontaine got away from Dmitry Kagarlitsky and slipped the puck past Ilya Nikulin to set up the Swede for his fourth goal of the season.

At that stage, things looked good. But it all went wrong midway through the second period. Vladimir Bryukvin reduced the deficit then, within seconds, Yuen was charged with slew-footing on Dynamo defenseman Andrei Pribylsky. Daniil Tarasov quickly converted the power play and Dmitry Moiseyev potted the game winner eight minutes later. For the second time this month, we had taken a lead against the Dynamo only to lose out by the odd goal in a high-scoring game. After six attempts in the KHL, Kunlun is still awaiting a first win over Blue-and-Whites.

Head coach Jussi Tapola admitted that these are tough times for the team. The form guide shows a disappointing return of just one win in eight games, meaning we remain deep in a battle to secure a playoff place. Here, after getting ahead, two blank periods from our forwards enabled the opposition to save itself and that’s something that the staff will be working on in the coming days.

“We had chances,” Tapola reflected. “But sometimes the goalie does well and sometimes our scoring isn’t quite there. We had power plays, we had a couple of good scoring chances but we need a little bit more and that comes with confidence. So, we’ll keep practising.”

Red Star’s next game is on Sunday against Vityaz, followed by another home engagement against SKA on Dec. 25.