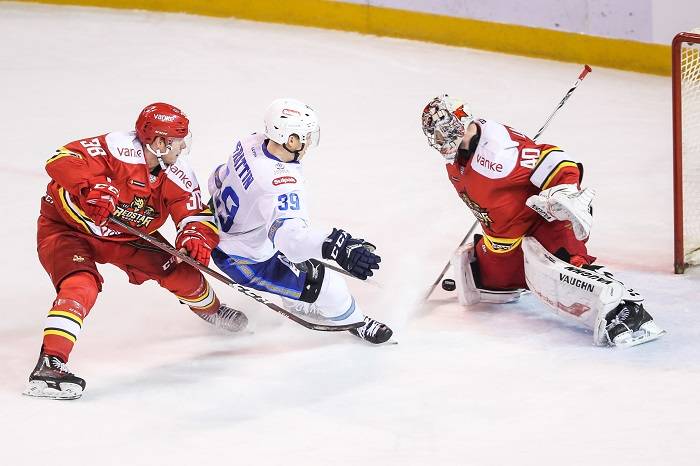 Sometimes, it’s the little details that make the difference. Against Barys, a seemingly comprehensive defeat owed much to two big chances within a minute of each other in the first period. One was taken, the other spurned. That went a long way towards setting the course for the game as a whole.

Returning home after a tough four-game road trip, Red Star was able to name something closer to a full-strength defensive roster again. Defenseman Tobias Viklund was back on the ice but his return proved to come too early – midway through the game he felt bad and had to go back to the locker room leaving Jussi Tapola with five blue-liners yet again. In attack, leading scorer Taylor Beck sat this one out as did fellow forward Justin Fontaine, leaving the team short of options going forward. Alexander Lazushin returned in net after Tomi Karhunen played in Yekaterinburg on Sunday.

Reduced firepower did not diminish our guys’ attacking intent in the opening exchanges. The first period was fairly even, with Red Star shading the shooting and possession stats. However, two incidents in quick succession proved to be definitive – and neither went the home team’s way.

First, a Barys counter-attack sprang the Kunlun defense and Matthew Frattin took advantage to open the scoring in the 15th minute. Within a minute, Red Star had a great chance to respond when Patrik Lundh went clean through on Dominik Hrachovina but could not find a way past the Czech goalie. An immediate tying goal at a time when the Dragons were enjoying the better of the game might have opened the way to victory; instead, the home team was forced to chase the game.

Even so, for a time it seemed that the chase might be successful. Wojtek Wolski tied the scores early in the second period, putting away a wrister from between the hash marks off Michael Latta’s feed from behind the net. The goal was deserved, with Red Star pressing Hrachovina’s net hard in the early stages of the middle frame. However, another mad minute midway through the game put Barys firmly in control. Another breakaway goal saw Anton Sagadeyev restore the visitor’s lead, then, exactly 60 seconds later, a Darren Dietz shot was redirected past Lazushin by the stick of Nikita Mikhailis.

There was no surrender, but for all Kunlun’s efforts in the third period the bounces just would not go our way in front of the net and there was to be no successful salvage operation this time. Instead, Barys finished it off with an empty net goal to complete a scoreline that somewhat flattered the visitor.

Now there is a short break before the action resumes on Monday against Amur. For Tapola and his men, it’s a vital chance to regroup and look at snapping the current five-game losing streak. It’s also an opportunity to rest tired bodies and help shake off some of those injury niggles. “We have a lot of important players out of the roster right now,” Tapola said after the game. “The most important thing now is to find a way. We have the rest of the week, we are not playing so there’s time for our team to find a way to get back on a winning track. Hopefully we can get some of the guys back in the next four days and they will be available for us next week.”

One player who may feature in next week’s games is young forward Huang Qianyi. The 19-year-old has stepped up from junior hockey to impress with our VHL roster and has been invited to join the KHL team.