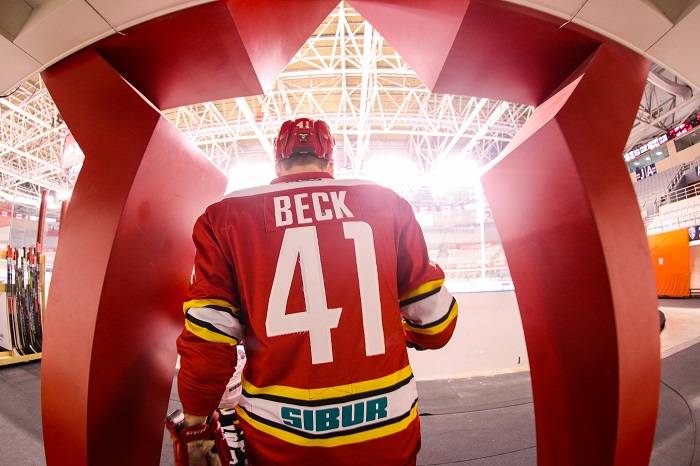 After a tough road trip it’s always good to get back home. There’s just one game in Shanghai on the eve of the international break when Red Star receives the pride of Kazakhstan, Barys Astana. Then on Monday we’re back in action with our first match-up of the season against Amur. Collecting points in these two games would open up a gap on our rivals for the top eight but head coach Jussi Tapola will be waiting for news on the fitness of defensemen Ondrej Vitasek and Tobias Viklund, both of whom suffered knocks in last week’s games.

Last time out: We haven’t played our Chernyshev Division rival yet this season; our last meeting was a 0-4 loss in Shanghai back in January.

Background: Goals, goals, goals. At either end of the ice, games involving Barys tend to be high scoring. Andrei Skabelka’s team has scored five or more on seven occasions, but allowed 5+ six times. Two games this season have finished 6-5, two more have ended 7-3. There’s been plenty of excitement and, after an early wobble that saw three losses in the first four games, plenty of success as Barys emerged as the leading challenger to Avangard at the top of our division. Experienced forward Roman Starchenko has set himself as the most productive attacker on the team, one point ahead of summer signing Andre Petersson, previously with Sochi and Avangard. Pavel Akolzin is the form player right now with 3+1=4 points from the last five games.

The Kazakh team has also performed strongly on the road with 12 victories and one overtime loss from 18 games away from home but it arrives in Shanghai on the back of a 1-2 reverse at Amur where a goalie error presented Tomas Zohorna with the game-winner. And goaltending has, perhaps, been the biggest question mark for Skabelka’s team. Dominik Hrachovina, who arrived in the summer from the Czech Republic, needed time to adjust to the KHL, while naturalized Kazakh Henrik Karlsson has been solid rather than stellar for much of the campaign.

Danger men: Veteran forward Brandon Bochenski is injured for this one but powerful two-way defenseman Darren Dietz is available and in form. The 25-year-old Canadian leads his team’s scoring from the blue line with 35 (11+24) points and looks set to establish himself as natural successor to Kevin Dallman, the KHL’s longest-serving import and a legend in Astana.

Last time out: This will be the teams’ first meeting of the season, with Red Star looking for its first victory since an overtime success in Khabarovsk just over a year ago.

Familiar faces: Forward Igor Velichkin played 39 games for Red Star in its inaugural season. He moved to Khabarovsk in 2017 but his appearances for Amur are limited – 22 last year and 10 in the current campaign so far.

Background: Last season saw Amur make the playoffs for only the second time in the KHL. This season, though, things have been very different. The loss of key figures – head coach Andrei Martemyanov to Avtomobilist, forwards Alexei Byvaltsev and Oleg Li to SKA, goalie Juha Metsola to Salavat Yulaev – has left the Khabarovsk team short of natural leaders. That’s been reflected in results, and in the difficulties finding a reliable replacement for Metsola between the piping. Libor Kasik arrived from the Czech Republic but struggled for form and left after just eight games, experienced former player Alexei Murygin returned to his home club but is currently injured and Kasik’s replacement, Marek Langhamer suffered a nightmare debut and has played less than three minutes since joining the club.

However, the club’s recent form gives some grounds for optimism. Although Monday’s win over Barys snapped a five-game losing streak, three of those games went to overtime – suggesting a team that is no pushover despite its lowly league placing.

Danger men: Czech forward Tomas Zohorna came in for criticism after a slow start to the season but he has picked up 6 (3+3) points in the last five games, including a game-winning 1+1 against Barys in Amur’s last fixture. Top scorer Igor Rudenkov, 23, is enjoying the most productive campaign of his KHL career with 18 (11+7) points so far.