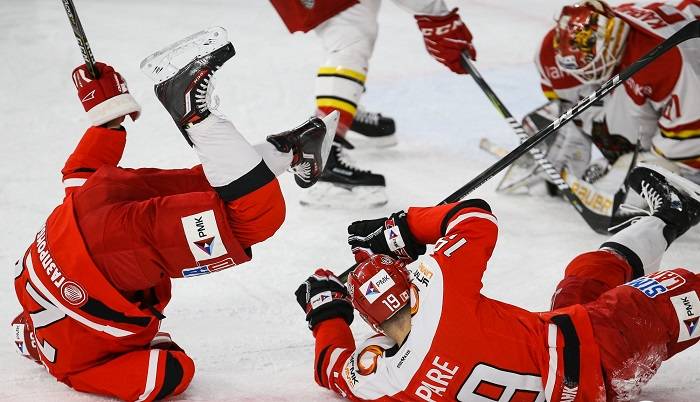 For the second time this season, Red Star gave Eastern Conference leader Avtomobilist plenty to think about. Sadly, though, for the second time this season the Motormen scored five goals on us to claim the win. However, it wasn’t until the closing seconds that this game was safe for the Kharlamov Division high-flyer. Red Star led 2-0 early on, and quelled one home fightback to tie the scores at 3-3 with six minutes to play.

The team’s resilience was all the more remarkable given the on-going injury crisis around the club. Jussi Tapola had just five defensemen and eleven forwards for this one – far from ideal against one of the most potent offenses in the KHL. This is nothing new, of course. We had the same problem for much of Friday’s game at Severstal and once again dug deep despite being short-benched.

For a time here, there was even hope of snatching an attention-grabbing victory against an Avtomobilist team that has been on top of the Conference all season. The first period could hardly have gone better. Tomi Karhunen, making his second debut after returning to the club last week, kept the home offense at bay; at the other end Red Star jumped to a 2-0 lead on goals from Veli-Matti Savinainen and Patrik Lundh. The first came when Wojtek Wolski moved down the left and slung the puck into the center for Savinainen. The Finn was too strong for Gurkin and beat Jakub Kovar with a backhanded shot. Two minutes later, the lead was doubled in similar fashion. This time, Olli Palola chased the puck in the corner and picked up Lundh in front of the net. The home defense was nowhere and Kovar had little chance of denying the Swede his third goal of the season.

The second period, though, saw the fatigue of a four-game road trip and the depleted resources available to Kunlun catch up with the team. Avtomobilist responded in style; three unanswered goals and a 3-2 lead at the second break.

Now the team’s character kicked in. Rather than roll over, Red Star fought back. With six minutes to play, the team got back into the game. Michael Latta’s pass found Tomas Mertl at the back door; the Czech wrestled in front of Vasily Torchenyuk to apply the finishing touch. Late tying goals have been a thing for Kunlun in recent games and now, once again there was a great chance to at least drag this game into overtime.

Sadly, it did not come off. A power play helped Stepan Khripunov restore Avtomobilist’s lead in the 56th minute and, this time, the last-gasp goal went against us to make the final score 3-5.

And so the latest road trip comes to an end. Battered and bruised on our travels, and with a disappointing return of two points from overtime losses at Lokomotiv and Severstal, we return to China to face Barys on Wednesday in the last game before the international break. Results did not go our way this time, but the team remains in a playoff spot – just. Kunlun and Traktor are tied on 35 points, but the men from Chelyabinsk have played one game more.