Through the pain barrier 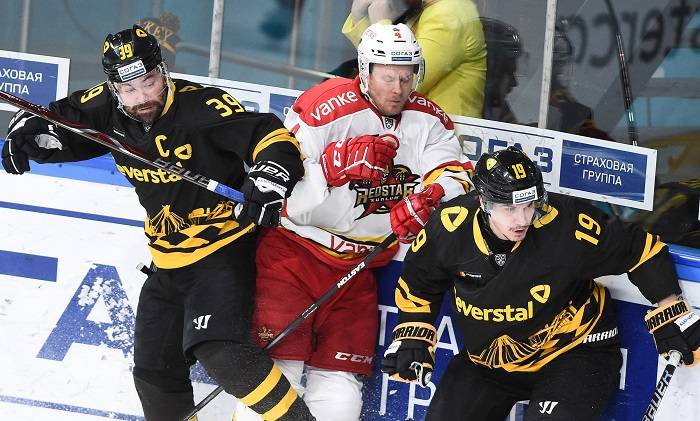 In a season where Red Star has had little luck with injuries, today’s game was another example of the never-say-die spirit in our team. The current road trip has added to the casualty list, with Johan Sundstrom picking up a knock in Yaroslavl and Tobias Viklund joining him in the treatment room after the Dynamo game. With reduced resources before the game even began, the loss of another D-man, Ondrej Vitasek, in the first period in Cherepovets merely added to the team’s problems.

Far from home, a goal down, and reduced to just five fit blue liners for the rest of the game, this was a situation that would test the courage and resolve of any team. Severstal, belying its lowly ranking in the KHL table, was keeping the pressure on Alexander Lazushin’s net.

But Red Star refused to back down. The second period saw our offense push ahead, outshooting the host almost two to one after deciding that attack might be the best form of defense. Only the strength of sometime Czech international goalie Dominik Furch kept Severstal in front. Our guys kept plugging away, looking for the break that could change the game. Finally, with barely two minutes left, it came. Patrik Lundh brought the puck out of defense, Olli Palola slung a pass across the ice to the wide open Brandon Yip and the captain produced a fine finish to beat Furch at last.

Moments earlier, Kunlun had relied on an intervention from the officials to wipe out Sergei Monakhov’s goal: the home forward got the puck in the net but was clearly encroaching on the paint as he stuffed it home following a Lazushin save. Now the game was tied and, not for the first time, Red Star had salvaged something from a losing situation.

So that was the good news. However, as  discussed previously, overtime has not been kind to our team this season. Once again, the extras were a step too far. In truth, Severstal never allowed us to get started in the additional period, keeping play at Kunlun’s end of the ice almost throughout. It took just 53 seconds for Vladislav Koloda to pot the winning goal.

So, battered and bruised, Red Star left beaten. However, the point plundered by captain Yip gives the team a two-point cushion over ninth-placed Traktor (beaten yesterday in Astana) and a three-point advantage over Neftekhimik (vanquished by Vityaz). Better still, Traktor has played one game more and Neftekhimik two. The playoff push remains very much alive and the Kunlun’s destiny is firmly in our own hands. Next, we got to Yekaterinburg to play Eastern Conference leader Avtomobilist on Sunday.