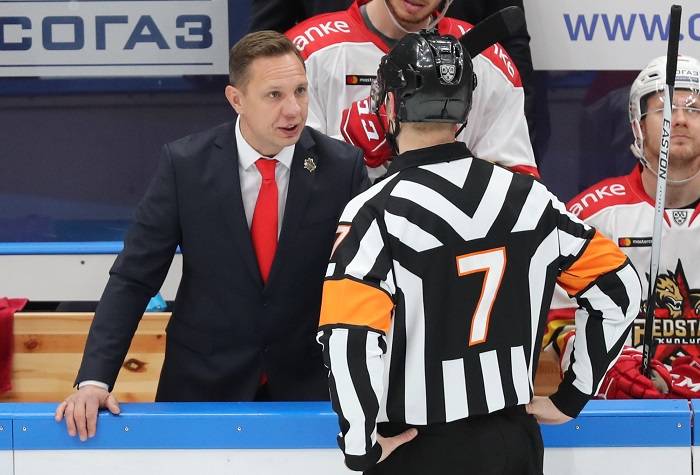 In recent weeks, it’s been a rare game in which Red Star leaves with nothing. Since the international break, this is only the second time in eight outings that our team has not managed to at least force overtime.

Not surprisingly, perhaps, it took another team in fine form to deny us even one point in our playoff push: Dynamo stretched its winning run to six games here, a surge that has lifted the Blue-and-Whites ahead of the pack in the race for the top eight in the Western Conference. In the end, a hard-fought game ended with the Blue-and-Whites taking the verdict by the odd goal in seven.

For head coach Jussi Tapola, it was an exercise in frustration – especially where Red Star’s special teams were concerned. “We allowed two soft goals and lost due to our special teams – they scored two on the power play and we didn’t,” he said. “That’s too much in a one-goal game like this. I’m not happy with our penalty kill today and we should have scored on the power play. Without that, it’s hard to win games like this.”

However, Dynamo’s hero Andrei Alexeyev highlighted how tough his team had found it: “Yeryomenko was great again today, it was only thanks to him that we won the game,” said the two-goal forward. “After we got 4-2 up we had a couple of penalties, Red Star piled on the pressure, but he came up big for us.”

Indeed, Yeryomenko faced 31 shots in a game where Red Star looked the better team when there was an equal number of men on both sides. That tally was three more than Dynamo fired at the home goalie’s one-time understudy Alexander Lazushin. New arrival Tomi Karhunen was named as back-up for the ex-Dynamo man but the Finn must wait his chance to make a second Red Star debut following his transfer yesterday.

Early in the game, Kunlun had the edge. Midway through the first period Olli Palola gave us a deserved lead when he redirected a Tobias Viklund shot past Yeryomenko. That was the Finn’s 11th of the season and it puts him out in front in the race to be Red Star’s leading goalscorer. There were claims for a second late in the frame as Taylor Beck crashed the net. He, Ilya Nikulin and Yeryomenko all ended up tangled in the goal; the officials were unimpressed with claims that the puck had joined them legitimately amid the confusion.

However, the second period saw Dynamo turn things around – and the home power play made a big difference. Alexeyev tied the scores on the PP after Lazushin took a tripping penalty. Nothing daunted, Red Star restored its lead when Wojtek Wolski’s pass sprung the home defense and Veli-Matti Savinainen raced through to win his duel with Yeryomenko. After that, though, the host moved ahead. Kagarlitsky made it 2-2, Igor Makarov got the 3-2 goal late in the frame.

Alexeyev returned to the fore with a second power play goal early in the third period: it took just 10 seconds for the Blue-and-Whites to execute a move from Vladimir Krikunov’s playbook and open a two-goal advantage for the first time in the game. Red Star did not give up and Justin Fontaine scored for the second game running to keep the pressure on Dynamo. Beck’s feed from behind the net was perfectly placed for the Canadian to rifle home from the bottom of the circle with the Dynamo goalie unable to react.

The closing stages saw two penalties on home defenseman Andrei Mironov and Red Star was able to establish itself in the home zone for long periods. However, the killer shot proved elusive and the game ended with Dynamo taking a narrow victory.