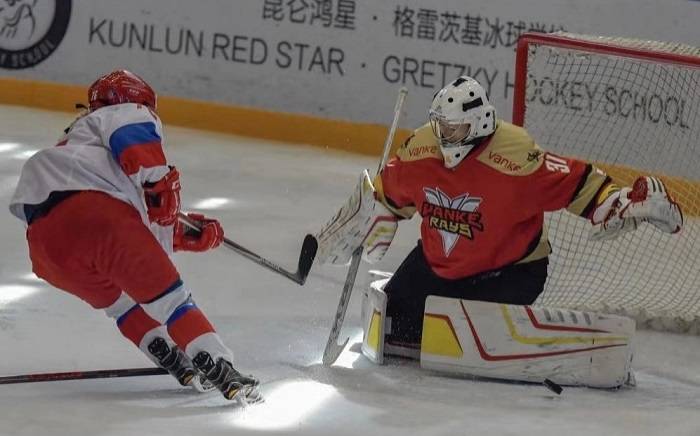 Kunlun Red Star isn’t just about men’s hockey – our club is also playing a key role in preparing China’s women for the 2022 Winter Olympics in Beijing.

A few months ago, the IIHF confirmed that as host nation, China would be invited to enter men’s and women’s hockey teams. The decision, inspired in part by the enthusiasm that greeted Korea’s involvement in PyeongChang in February, gives a huge boost to the sport in this country. At the same time, though, it poses an exacting challenge. The Olympics is the high water mark in any sport; for a fledgling hockey nation like China to compete requires some serious preparation.

The progress of men’s hockey in the KHL is well known. Red Star is learning with every game, Chinese-eligible players are earning valuable experience of top-level hockey and the whole edifice is underpinned by feeder clubs playing in minor or junior hockey. Any given result is a handy yardstick for the teams’ progress but, at the moment, the Olympian ideal about participation being the thing that counts has a special resonance. By competing at this level, our hockey program can grow; by 2022, hopefully, it will have a roster strong enough to deserve its place on the ice alongside the top nations.

For our women, it’s a similar story. However, our KRS Vanke Rays team, based in Shenzhen, has opted to play in Canada’s CWHL rather than Russia’s Women’s Hockey League. There’s some logic in this. Canada has won the lioness’s share of Olympic gold since women’s hockey became part of the sporting festival in 1998. The CWHL has attracted many top female players, including the likes of Finnish goalie Noora Raty, who played with us last season as she prepared for her Olympic campaign. To be the best, we have to play against the best, and the CWHL makes that possible.

However, that doesn’t mean there’s no connection with Russian women’s hockey. The start of December saw two challenge games in Shenzhen where our girls took on a Russian national team. For Russia and China it was a chance to assess some of the talent that could be hunting Olympic glory in 2022.

True, the Russian roster did not closely resemble the team that reached the last four in PyeongChang, the country’s best ever Olympic result. But that’s all part of the preparation process, testing the strength in depth and looking for the stars of the future. As such, many of the Russian team had been part of the U18 roster that so impressed in World Championship action in Dmitrov in January, earning the first ever victory for a Russian women’s team in international play against Canada.

A stern test awaited, but it was one that our ladies handled commendably, winning both games. On Sunday, the Vanke Rays won 2-1 in regulation. Leah Lam opened the scoring late in the second period, Russia tied it up in the third through Alyona Zubkova, but Cayley Mercer grabbed the winner midway through the final frame. Vanke goalie Wong Yuqing was picked as the star of the game after making 26 saves, Alexandra Carpenter had assists on both home goals.

Game two was even tighter but again the Rays shone to earn a shoot-out victory. This time Jessica Wong was the key player, scoring the opening goal in the seventh minute then claiming the game-winner. In between, Elina Mitrofanova, a World Championship bronze medallist, got a tying goal for the Russians as the teams tied 1-1 in regulation.