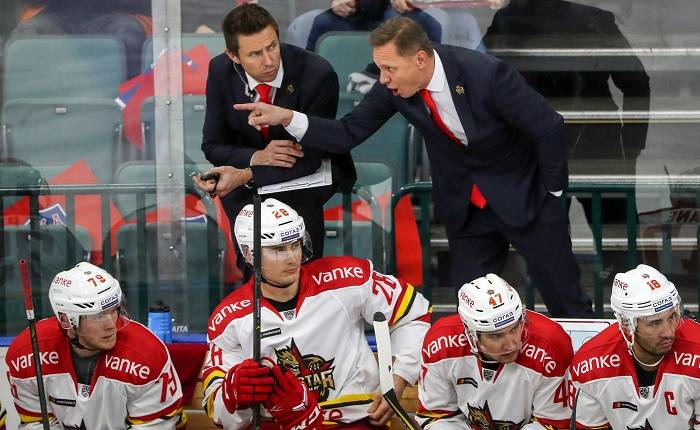 After picking up a solid seven points from last month’s home stand, it’s back on the road this week with a place in the playoffs to defend. At the start of the latest tour, Red Star is two points ahead of ninth-placed Traktor, with Neftekhimik a further point adrift. Four games in a week poses a new set of challenges, but offers the chance to consolidate our position in the race for the playoffs. Here’s the low-down on our upcoming opposition.

Last time out: This is the teams’ first meeting of the season; back in January we lost 0-2 in Yaroslavl.

Familiar faces: Goalie Alexander Lazushin made his KHL debut for Loko in the 2010 playoffs and featured nine times in total for the Railwaymen before moving to Metallurg Novokuznetsk.

Background: Lokomotiv’s youngsters, under guidance of head coach Dmitry Kvartalnov, have been among the more eye-catching features of the season in the Western Conference. Teenage forwards Nikolai Kovalenko and Grigory Denisenko, and 20-year-old goalie Ilya Konovalov are among those who have seized their chances and secured plenty of game time, while the team has climbed to fourth in the West. There’s plenty of experience on the roster as well, with the likes of Staffan Kronwall and Petri Kontiola on hand to nurture the exciting prospects at the club.

Danger men: Forward Andrei Loktionov is on a rich run of form, with six goals in six games helping him to 31 (13+18) points from 33 games. Czech defenseman Jakub Nakladal scored on Red Star in both games against Lokomotiv last season.

Last time out: This is the teams’ first meeting of the season; towards the end of the 2017-18 campaign we lost 2-5 in Moscow.

Background: Like us, Dynamo is in the thick of a battle to reach the playoffs. The Moscow club invested heavily in the summer to acquire forwards Vadim Shipachyov and Dmitry Kagarlitsky but a poor start to the season cost head coach Vladimir Vorobyov his job a month into the campaign. The vastly-experienced Vladimir Krikunov replaced him and since then there have been signs of steady improvement. The Blue-and-Whites are on a four-game winning streak at the time of writing, their best sequence of the season so far.

Danger men: Shipachyov and Kagarlitsky lead the scoring for the Muscovites, but Finnish D-man Juuso Hietanen is a special threat to Red Star. Last season he scored twice in that 5-2 win in February and he also found the net when the teams met in China.

Last time out: The teams last met back in December and Red Star claimed a 2-1 overtime success thanks to an Arturs Kulda goal.

Familiar faces: That man Kulda swapped Red Star for Severstal in the summer. Oleg Yashin, who was part of our historic first season, is in his second campaign in Cherepovets.

Background: Last season’s trip to the playoff raised hopes that Severstal might be on the up, but the current campaign has been a struggle. Andrei Razin arrived as head coach on November 28, replacing Alexander Gulyavtsev. Victory at Neftekhimik on Dec. 1 ended a seven-game losing run (and did Red Star a favor in our playoff battle) but the team remains in a dogfight with Dinamo Minsk to stay off the foot of the Western Conference. Despite the team’s problems – so far, Severstal has not won back-to-back games – there was a notable success early in the campaign when goals from Kulda and Sergei Monakhov secured a 2-1 win at CSKA.

Danger men: Against the background of a grim season, 20-year-old forward Igor Geraskin’s 10-point contribution has been a rare highlight for the Steelmen.

Last time out: On Oct. 7 Avto extended its unbeaten start to the season with a 5-2 win in Shanghai.

Familiar faces: Taylor Beck’s KHL career began with Avtomobilist before he joined us partway through last season. Our old goalie, Andrei Makarov, arrived in Yekaterinburg a couple of weeks ago when Andrei Martemyanov’s team needed cover for the injured Jakub Kovar.

Background: Avtomobilist invested heavily in the summer to acquire potent forwards Nigel Dawes, Stephane da Costa and Dan Sexton. The rest of the league watched to see if this marked the arrival of a new challenger in the East – and the answer came quickly. An 18-game unbeaten run at the start of the season put the team on top of the Eastern Conference, and it’s stayed there ever since. However, since the international break, there have been some signs of weakness. A run of six losses in nine games after the Karjala Cup saw CSKA Moscow take over at the top of the KHL table while Ak Bars closed to within four points in the Kharlamov Division. A big win at Barys on Dec. 1 might be a turning point, but with a six-day break after that game it might be hard for the Motormen to maintain their momentum.

Danger men: No prizes for guessing the man to watch here. Nigel Dawes has been in fine form all season, quickly settling in after his move from Barys. He scored against us in October and recently he picked up five (2+3) points in one game against his former club, moving to 45 (17+28) points for the season. Fit again goalie Kovar is also a key figure: the team’s recent slump coincided with the Czech international’s absence through injury.