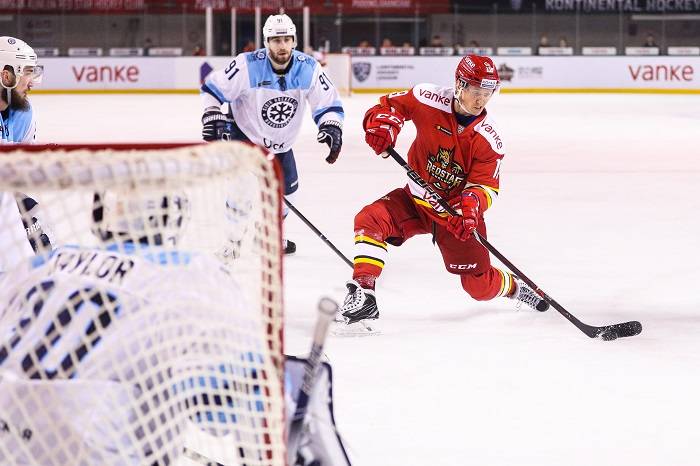 After Wednesday’s woe at the end of a thriller against Sibir, it was straight back into action against the same opponent. The first game showed the best and worst of Red Star; on Thursday, it was very much the spirit of our third-period fight-back that came to the fore once again.

This was a big game for Brandon Yip, in particular. Our captain led from the front and was credited with a hat-trick to take him to 10 goals for the season. Head coach Jussi Tapola was impressed. “Brandon showed some great leadership qualities tonight,” he said. “I think after yesterday’s game we played much better and deserved that win.”

The result snapped Sibir’s five-game winning streak: this is no longer the struggling Sibir team that spent so long rooted to the foot of the KHL table. As an aside, the visitor’s previous loss, back on November 14, was also against Red Star and the game also finished 4-2 in our favor. The victory wraps up the latest five-game home stand and gives the team a solid return of seven points from a possible 10. For head coach Tapola, it’s been a decent sequence of games. “Five games, seven points. I think that’s OK, not perfect of course but OK,” he said. “But in general, from the point of view of developing our game, it’s been a really good series.”

Yip opened the scoring in the fifth minute, applying a close-range finish after Patrik Lundh’s redirect on a Tobias Viklund shot caused confusion in front of the Sibir net. The lead was short-lived, with Jordan Caron tying the scores on the power play; Sibir’s man-of-the-moment Shane Prince got an assist to keep up his record of productivity in every KHL game he’s played so far.

The second period was briefly disrupted by problems with the ice; out came the Zamboni to smooth it over and the new surface proved to the players’ liking. Veli-Matti Savinainen restored Red Star’s lead on the power play; the Finn flipped a Johan Sundstrom feed into the top corner for his first goal since returning from injury. Sibir replied almost immediately with yesterday’s shoot-out hero Danil Romantsev puncturing the mood once again to make it 2-2.

The scoreline flattered the visitor, though, and in the final stanza Red Star put the game away. Yip got the game-breaker to make it 3-2, wiring a wrister to the top corner from the deep slot after Tomas Mertl’s feed invited him to stride in from the point. Visiting goalie Danny Taylor had a clear view of the shot but could not get over to it and make the save.

And, of course, after the dramatic finale to Wednesday’s game, where Kunlun scored twice in the last 15 seconds, the day would hardly be complete without a late goal. Yip duly obliged, firing into the empty net from the red line with 38 seconds to play and completing his hat-trick. It might have lacked the drama that we witnessed 24 hours earlier, but it sealed a very welcome two points.

Now the team prepares for its next road trip in early December, with upcoming games at Lokomotiv, Dynamo Moscow, Severstal and Eastern Conference leader Avtomobilist. Today, Red Star stands three points clear of ninth-placed Neftekhimik, having played two games fewer. When we take to the ice in Yaroslavl on December 3, we look set to have a playoff place to defend.