Never leave before the end 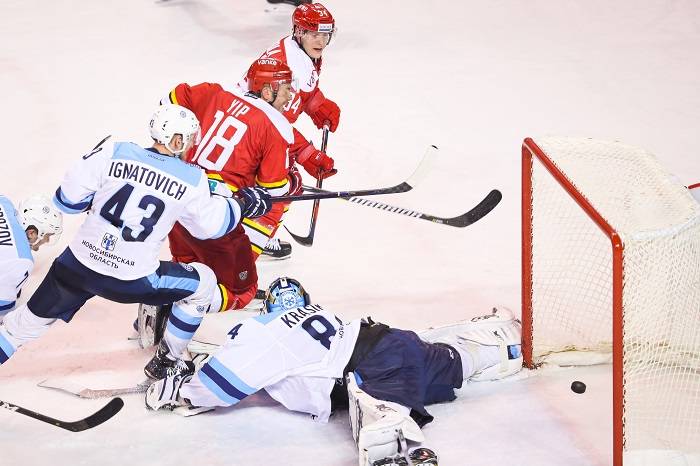 What a finish! Two goals in the final 15 seconds of this pulsating game saw Red Star complete a stirring fightback from 1-5 to tie Sibir and pick up a point that keeps the team in the top eight regardless of Neftekhimik’s result later today.

Olli Palola was the hero of this dramatic turnaround, grabbing both of those late, late goals to stun Sibir. The Finnish forward completed the first hat-trick of his KHL career, having also scored Kunlun’s first goal in the opening stanza.

Frustratingly, it wasn’t enough to take the win: overtime was tough as Red Star had to kill a minor penalty picked up by Tomas Mertl, then Sibir claimed the shoot-out thanks to a solitary strike from Danil Romantsev. That was the first and only time Alexander Lazushin was beaten; the goalie replaced Barry Brust in net at the start of the third period with the score at 1-5 and his 10 saves (plus winning three out of four duels in the shoot-out) played their part in our revival.

But it was Palola who grabbed the attention. First he got it back to a one-goal game on 59:45, claiming the faintest of touches on a Blake Parlett shot from the center point and giving Red Star renewed hope of salvaging the game. Then, 12 seconds later, the Finn was at it again. A Ville Lajunen slapshot, very much the last throw of the dice for our team, deflected off a visiting defenseman and into Palola’s path. The puck bounced between his skates before he was able to flick it past Alexei Krasikov and into the net. Delirium for Kunlun, despair for Sibir, disbelief for everyone in the arena.

The road back into the game began midway through the second period. Patrik Lundh made the score 2-5 in the 49th minute, pouncing on the rebound from a Taylor Beck shot. At that stage, Sibir still seemed safe, but Lajunen’s well-placed shot off a Lundh feed three minutes later gave our guys belief. And that belief survived until the very end, getting its reward in that dramatic last minute.

Earlier, though, things were very different. Sibir arrived on the back of a five-game winning streak and quickly demonstrated how much the team had improved since our 4-2 victory in Novosibirsk two weeks ago. In a first period of few chances, the visitor scored three – and our old friend Gilbert Brule played a leading role with a goal and an assist after Palola’s tying goal in the 13th minute. The second period was still more frustrating: Red Star played some good hockey, made a full contribution to the game but ended up two further goals adrift. Brule got his second helper of the evening, Nikita Mikhailov potted his second goal.

The third period changed everything and even though the fightback ultimately foundered in that shoot-out, the power with which Kunlun hit back in the closing stages sets up the next clash between these teams. The momentum, surely, is back with our team – post-game lotteries notwithstanding – and there’s every reason to expect sparks to fly. Best of all, there’s not long to wait for the next instalment: we meet again tomorrow evening, ready for revenge.