In this game, you have to take your chances. After an evenly-matched battle against Spartak, the difference came down to the team that showed the greater composure in front of the net – and sadly for Red Star, that proved to be the visitor. Two unanswered goals, both on the power play, gave Spartak the verdict and cost Kunlun the chance to open a two-point gap over Neftekhimik in the race for eighth place.

The early stages suggested that the team was ready to build on its back-to-back wins since the international break. First chances came our way: Wojtek Wolski tested Nikita Bespalov, Justin Fontaine drew a sprawling save from the visiting goalie then Wolski went close again. Spartak’s cause wasn’t helped by the loss of injured defenseman Maxim Goncharov, but the visitor got a break when Cory Kane took a penalty. The subsequent power play proved decisive: the Red-and-Whites set up camp in the Red Star zone and Ilya Zubov fired home the opening goal. The scoreline did not reflect the balance of play, but Kunlun was punished for failing to press home its early advantage.

Buoyed, Spartak had the better of the second period. Now it was time for Alexander Lazushin, back in action for the first time in almost exactly a month, to strut his stuff. The fit-again goalie let nobody down, making 16 saves in a session that saw Red Star plagued by penalties and unable to get its game going.

Lazushin is competing with recent signing Barry Brust for the starting goaltender role. Head coach Tapola admitted that it’s not an easy call. “Right now, I can’t say,” he said. “Both of them are playing really well. All we can do is watch their progress day by day and see who is performing better.”

The final frame was a different story. This time, Red Star pushed Spartak back. The scores might have been tied early in the period when Fontaine’s redirect forced a big pad save from Bespalov; by the midway stage Alexei Zhamnov was screaming at his charges to keep hold of the puck at all costs as Kunlun menaced the visitor’s net. Once again, though, the finishing touch was missing. Back-to-back penalties for Spartak saw just one clear-cut opportunity for our guys, with Bespalov managing to deny Brandon Yip after Johan Sundstrom’s dash behind the net.

Frustrations spilled over in the closing stages. A penalty on Joonas Jarvinen late on stalled the final charge; Lazushin rushed to the bench anyway but after moments Alexander Khokhlachyov shot wide of the empty net, Artyom Fyodorov applied the coup de grace. A final indignity: the Red Star bench appealed for offside, the video review went against us and the team finished the game with a minor bench penalty. It was one of those days where anything that could go wrong, would go wrong.

“Overall, if you look at the full 60 minutes, this was one of our best performances,” Tapola concluded. “But our problem is that we didn’t score goals, even though we had chances. We need to find a way to score more, because without goals you can’t win hockey games.”

Happily, the team has a chance to put Friday’s disappointment behind it right away. Red Star is back in action against HC Sochi on Sunday here in Shanghai, looking to keep up the pressure in the battle to secure a playoff place. 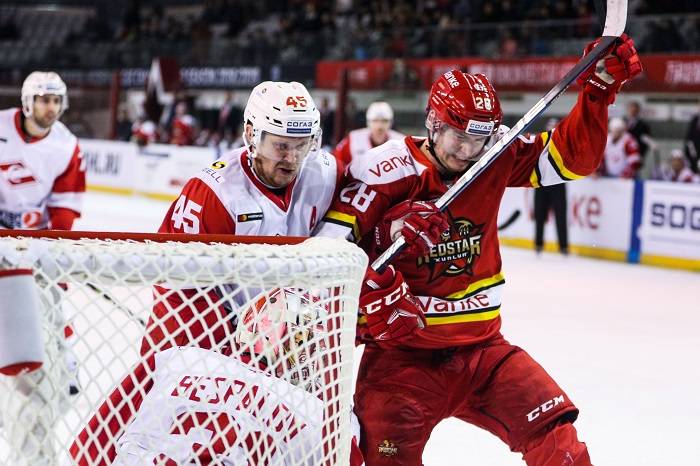