Back with a bang

On this occasion, revenge came quickly. At the start of the month, Red Star suffered a 1-4 loss in Minsk. Today, our team handed a similar defeat to Dinamo. And there’s more. The win moved Kunlun back into the playoff places – just – and ended the Belarusians 100% record here in China.

The game pitted some familiar faces against their former clubs. For us, Justin Fontaine suited up against the team he represented last season, although Marc-Andre Gragnani missed out today. For Dinamo, our former forward Andrei Kostitsyn returned to Shanghai in good form – he potted a hat-trick in his last appearance as the Bison won 4-3 at Amur.

Wednesday’s victory was a tribute to the team’s mix of hard work and relaxation during the recent international pause. Downtime is a rare luxury in the helter-skelter schedule of the KHL campaign, so a run of one game in two weeks was a great chance for the team to recover from the strain of the first part of the season and work on the detail of its game. Head coach Olli Palola explained more: “We combined practice with rest,” he said. “Before our game at Sibir we had a team camp near Moscow and worked really well there. When we came back from Novosibirsk, the coaching staff agreed to give the players four days off and followed that up with two intense practices. So, we wanted to combine business and pleasure.”

For Kunlun, this was a first home game since October 26. Anxious to make it a happy homecoming, the guys started on the front foot and wasted little time establishing a 2-0 lead. Olli Palola got the first, beating Jhonas Enroth at the second attempt to open the scoring in the third minute. Then Dinamo’s Dmitry Zakharenko coughed up the puck in center ice, allowing Red Star to launch an odd-man rush that Cory Kane converted with aplomb. 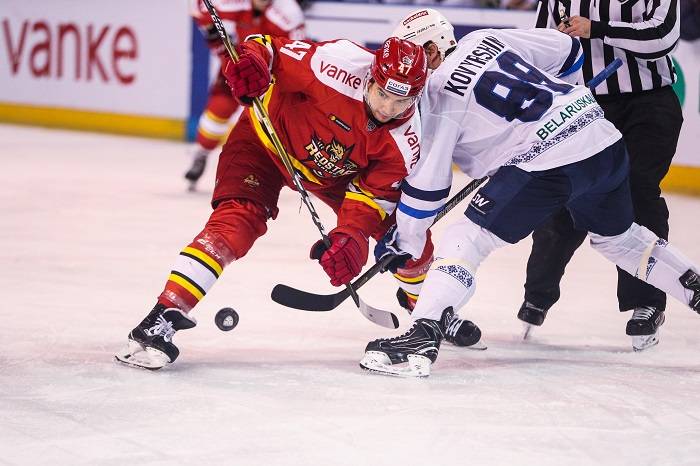 In Belarus, finding a way past Swedish international Enroth was a challenge. Here, with two quick goals on the Minsk goaltender, the atmosphere was very different. Red Star could play with confidence, enjoying its hockey and putting on a fine show for the home fans. “We controlled the first half of the game, it was a solid performance from Kunlun,” Tapola added. “Later on, Dinamo more or less got back into the game but in the end, we were able to finish with the right result.”

Along the way there was a big moment for Fontaine against his former club. Midway through the second period, the Canadian picked up his third goal of the season, smashing home an Ondrej Vitasek feed from the top of the face-off circle.

Only then did the visitor make its way into the game, but Red Star’s three-goal lead was never at risk. Denis Kazionov pulled one back early in the final stanza but Vitasek added an empty-net goal to his second-period assist to complete a convincing victory.

For Dinamo, head coach Andrei Sidorenko had no complaints about the result. “We were half asleep at the start of the game and made stupid mistakes that led to goals,” he said. “For the first half of the game, Red Star played well and controlled the play. By the time we started to create some chances to score, it was already too late.”

Next up, Spartak comes to Shanghai on Friday; another Red Star victory would make it three in a row and maintain our playoff place.