Back home and battling for the playoffs - Kunlun Red Star

Back home and battling for the playoffs

Hockey action is back in Shanghai with five games in the next eight days. Red Star is battling hard to secure itself a place in the top eight in the Eastern Conference and reach the playoffs for the second time in its history. The upcoming games offer a great chance to pick up valuable points in our race to reach post season. So, who’s coming to town?

Nov. 21 – Dinamo Minsk
Last time out: lost 1-4 in Minsk on Nov. 1.
Familiar faces: defenseman Marc-Andre Gragnani and forward Justin Fontain joined us from Dinamo over the summer; Dinamo forward Andrei Kostitsyn played for Red Star last season while assistant coach Andrei Kovalev has experience of Chinese hockey from his spell behind the bench at Asia League outfit China Dragons and the national team back in 2009-10.
Background: The Belarusians haven’t enjoyed this season so far. Rooted to the foot of the Western Conference, the team suffered a club record losing streak under Gordie Dwyer. The likeable Canadian showed signs of turning the corner with wins in two of his last three games – including that success against Red Star in Minsk – but still lost his job during the international break. Andrei Sidorenko has since taken the helm and he started his Far Eastern tour with a thrilling overtime victory at Amur on Monday.
Danger men: Andrei Kostitsyn’s hat-trick in the win at Amur makes him Dinamo’s leading scorer this season, ahead of Finnish import Teemu Pulkkinen. Another summer signing, Canadian defenseman Patrick Wiercioch, has been productive from the blue line with 13 (3+10) points from 27 games.

Nov. 23 – Spartak Moscow
Last time out: won 2-1 in Moscow on Sep. 7 for our first victory of the season.
Familiar faces: Our Finnish defenseman Ville Lajunen played for the Red-and-Whites last season.
Background: Another Western Conference team that changed its coaching set up, Spartak released Vadim Yepanchintsev on Oct. 19 after inconsistent results. Alexei Zhamnov moved behind the bench as an interim measure and a permanent appointment has not yet been announced. In November, Spartak played five games before setting out on its expedition to the Far East: wins over Salavat Yulaev, Dynamo Moscow and Avtomobilist were followed by a 4-2 success at Admiral as the Red-and-Whites began their Oriental excursion.
Danger men: Alexander Khokhlachyov’s three-point haul saw Spartak battle back to defeat table-topping Avtomobilist and moved him alongside Kaspars Daugavins on Spartak’s scoring charts. Defenseman Andrei Kuteikin has also hit the headlines this season with his trademark shots from center ice – our goalies will need to be alert to that unusual threat from long range.

Nov. 25 – HC Sochi
Last time out: lost 1-2 (OT) in Sochi on Sep. 5 for our first point of the season.
Familiar faces: Forward Sean Collins began his KHL career with Red Star in our debut season.
Background: Sochi was Red Star’s base for part of our pre-season preparations and the teams met again in a pre-season tournament in St. Petersburg, so there will be few surprises in store ahead of this game. The Black Sea team is handily placed in the Western Conference despite a season where wins and losses have alternated on a regular basis. Sochi has yet to enjoy more than two victories in succession, but its worst streak was limited to four straight losses – two of them requiring overtime.
Danger men: Two imports lead the way for Sochi. Swedish center Robert Rosen has been productive since his summer switch from Vaxjo Lakers while alternate captain Eric O’Dell is on course for his highest-scoring season in the KHL after the former Winnipeg Jet arrived in 2016.

Nov. 28 & 29 – Sibir Novosibirsk
Last time out: won 4-2 in Novosibirsk on Nov. 14.
Familiar faces: Former Red Star players Pavel Vorobei and Gilbert Brule are now on the roster at Sibir.
Background: Our Chernyshev Division rival has been near the foot of the Eastern Conference all season following a horrific 12-game losing streak at the start of the campaign. That start saw former Red Star head coach Vladimir Yurzinov lose his job, replaced by Alexander Andrievsky, but an extensive rebuilding job has yet to produce a roster capable of climbing the table. A shoot-out win over Amur on Nov. 16 snapped a six-game losing run and lifted the team above Admiral; two days later Sibir beat Dynamo Moscow 6-4 to record back-to-back victories for the first time this season.
Danger men: We know all about Gilbert Brule’s ability and he offered a quick reminder when he got his first Sibir goal against us last week. Young forward Nikita Mikhailov’s form has been one bright spot in a difficult season. The 20-year-old was named September’s best rookie and had 11 points from 26 games to lead the team’s scoring. 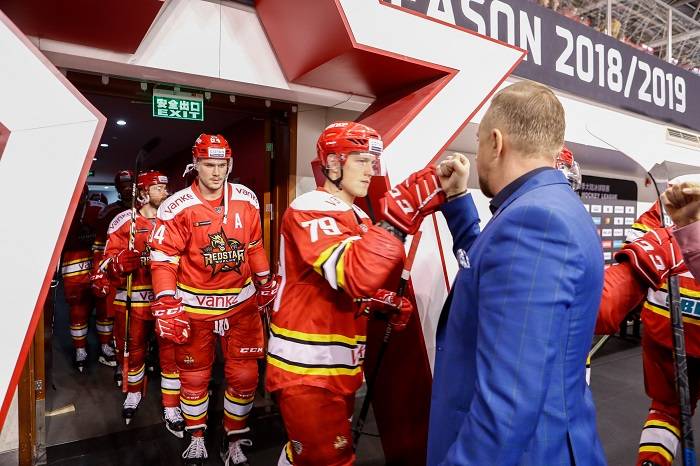