It was a day of firsts for Red Star’s latest signings: Joonas Jarvinen made his second Kunlun debut at Vityaz and Wojtek Wolski got his first points since his return to the club last month. It all added up to a first ever victory at Vityaz, snapping a three-game losing streak and moving our guys to within two points of a playoff place.

Jarvinen’s debut – also his 101st appearance for the club – was just one of the changes in the roster. Goalie Ivan Nalimov left the club during the week, as did forward Martin St. Pierre. That meant local goaltending prospect Sun Zehao featured as Barry Brust’s understudy.

The win was well-deserved. Following the 1-4 loss at Dinamo Minsk and arguably Red Star’s most disappointing performance of the season so far, this was a game to put things right. It was a chance to restore some faith that the team is capable of battling for a top-eight finish and to prove that we can get results against rivals on the fringes of that playoff race as well as producing sensational results against the likes of Ak Bars or CSKA.

As head coach Jussi Tapola observed: “This was a big win for us and we deserved it because we battled from start to finish. A couple of times the post helped us out, but I think we deserved that bit of luck because we kept going, didn’t give up and took our chances. We have to give our guys their due.” 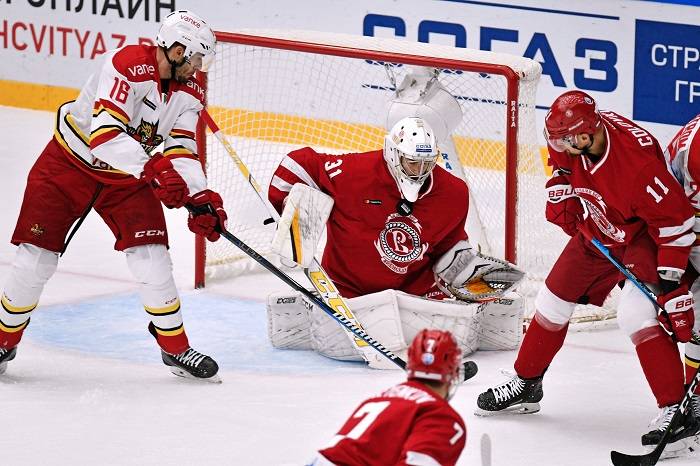 Wolski’s first contribution was an assist as Brandon Yip opened the scoring with a power play goal in the 25th minute. Johan Sundstrom got the puck behind the net and moved it wide for Wolski, whose pass found Yip out in front for a decisive shot on Joni Ortio. His game-winning goal came early in the third when he unleashed his deadly wrist shot after Sundstrom won a face-off in the Vityaz zone. It was an impressive way to open his account at Red Star for the second time.

But, as Tapola pointed out, there were some anxious moments around Barry Brust’s net. Early in the game Alexander Syomin dinged one off the post before Alexander Chernov drew a fine blocker save from our netminder in a goalless opening frame. The second period saw Vityaz grab a tying goal for Alexander Nikulin, who put away the rebound from a Yegor Voronkov shot. And both teams had big chances to go 2-1 up late in the second period: Tomas Mertl saw his shot clip the Vityaz bar before Artyom Shvets-Rogovoi hooked a shot wide of an open net.

Even after Wolski’s super strike, there was another scare as Miro Aaltonen rattled Brust’s piping once again but the host could not find a way to tie the game and deny Red Star its first ever victory in this corner of Moscow Region.

There’s one more game to come before the international break; on Monday, we go to Balashikha to face Chernyshev Division rival Avangard. Then it’s a valuable opportunity to regroup as a team, with only a trip to Sibir on Nov. 14 before the start of our home stand on Nov. 21 against Dinamo Minsk.