Following the heroics of our shoot-out win over Ak Bars, it was always going to be hard to reproduce the same level of intensity. Just two days of recovery time after an evening that was both physically and emotionally draining meant that the visit of Torpedo was never going to be an easy game.

However, the nature of hockey at this level is that we need to collect points day in, day out. Playoff places are won not by spectacular one-off performances, but by consistent, solid displays that pick up the rewards. And, while the Torpedo game ended in defeat, it at least brought the consolation of a point for forcing overtime. That moves us one point clear in eighth place and means that only once in the last seven games has Kunlun gone away with nothing. That is where teams progress up the championship table, and a sequence of four wins and two overtime losses has lifted Red Star right into the thick of the race for a ticket to post-season. 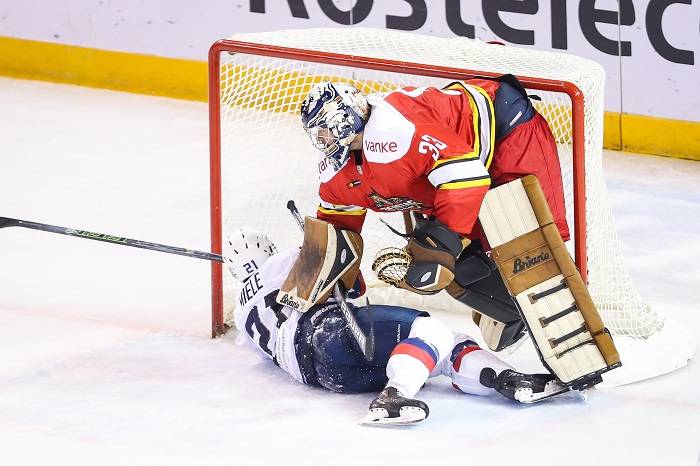 For home fans, Friday’s game was a first chance to see new goalie Barry Brust in action. The Canadian has won the Calder Cup and set records in the AHL, as well as generating extensive KHL experience with Medvescak Zagreb, Slovan Bratislava and Ugra Khanty-Mansiysk. He certainly found plenty to do early in the game: Red Star started slowly, allowing Torpedo to gain the early momentum, and head coach Jussi Tapola admitted that he was relieved to get to the first intermission with the game still deadlocked.

Brust’s biggest moment in that opening frame stemmed from a misplaced pass in our own zone; Torpedo’s Mikhail Varnakov was alert to the opportunity and homed in on the net only for the goalie to get a pad in the way and deny the clearest chance of the first period.

Sadly, that defensively hesitancy continued into the second period and was punished in the 25th minute. As Ville Lajunen tried to bring the puck out of our end, Torpedo’s Daniil Ilyin got in to make the interception. His pass found Dmitry Markovin unmarked in front of goal and there was no answer to his top-shelf finish.

At last, Red Star picked up its game. The rest of the second period and much of the third saw some better hockey, even if it struggled to meet the high standards set in Wednesday’s victory over Ak Bars. The improvement got a reward, though. Midway through the third period Martin St. Pierre tied the game with a shot from the boards that flew past Stanislav Galimov as Patrik Lundh put up the screen in front of the visiting goalie.

Seeing the game go to overtime was no great surprise: throughout the season, Torpedo has frequently gone beyond its allotted 60 minutes. Brust again kept us in it, denying Varnakov in the extras, but when it got to a shoot-out Galimov proved to be unbeatable. Robert Sabolic got the decisive score to give our guest the additional point.

Friday’s game brings our latest home stand to an end. Next up we’re on the road to St. Petersburg for a showdown with SKA’s stellar roster. But, after defeating Ak Bars (twice) and CSKA already this season, there’s no reason for fear as we make the long journey west. After Petersburg on Tuesday, it’s Dinamo Minsk, Vityaz and Avangard to complete the itinerary before the international break.