The last time these teams met, back on September 16 in Shanghai, Dinamo was in top form while Red Star was still finding its feet in the current season. The result? A 4-2 win for the Latvians. Now, almost a month later, the tables are turning. Reinforcements to the Red Star roster, coupled with a greater understanding of how head coach Jussi Tapola wants to play the game, have helped boost our results. Meanwhile, in Riga things were getting tough: while we improved, Dinamo suffered a run of five straight losses coming into this game.

Further reinforcements appeared for our guys beside the Baltic. Goalie Barry Brust suited up as cover for Alexander Lazushin, while Krisjanis Redlihs made his debut in the very arena where he played the last 10 seasons on the blue line for Dinamo. To add savor to his evening, the defenseman got to play against his brother, Riga forward Mikelis. More pertinently, Krisjanis helped to compensate for our recent lack of available defensemen and immediately slotted into the second line alongside Tomas Kundratek. 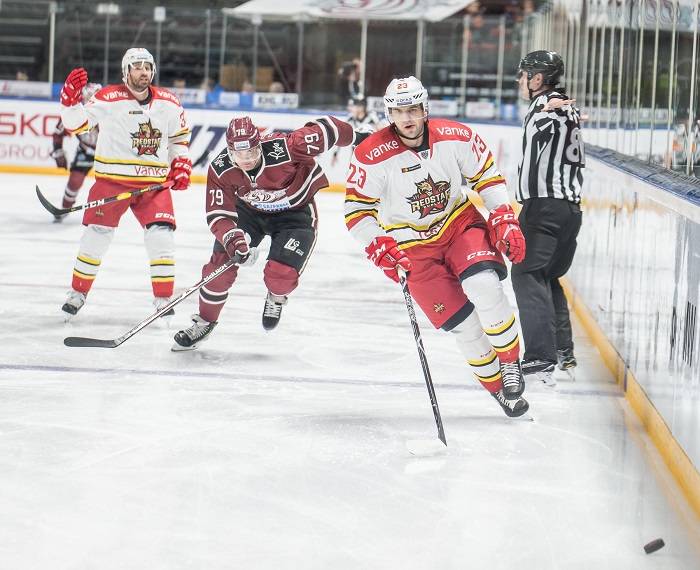 On the ice, it was a perfect opportunity to test how far the team has come in the space of a month – and this performance showed that real progress has been made. Despite its recent form, the home team had its dangermen, and none more so than former Red Star man Linus Videll, leading the KHL scoring charts ahead of Friday’s game. But a combination of combative play across the ice and clinical finishing when chances arrived ensured that Kunlun continued its upward trajectory while Dinamo was left in decline.

The first goal went to Ville Lajunen. Yip sent the puck round the boards for Taylor Beck to collect behind the net. Out came the pass to the top of the circle, where our Finnish defenseman took one touch before shooting past Kristers Gudlevskis to break the deadlock in the 15th minute.

In the second period, Dinamo adopted a ‘shoot-on-sight’ policy – good for the shot count, but ineffective in beating Lazushin as he stopped all 15 attempts that reached him. And, once again, after absorbing the pressure, Red Star took its chance when it arrived. This time, Lajunen was the architect, collecting a Justin Fontain pass and shaping to shoot before threading a pass to Olli Palola between the hash marks. With the home defense wrong-footed, Palola shot home just as Mikelis Redlihs emerged from the penalty box.

Silencing Videll was one of the key defensive tasks for this game. Red Star achieved that, but could not completely blank the host. A power play goal from Andris Dzerins midway through the third period threatened to trigger a Riga recovery.

Dinamo’s threatened fightback did not happen. Instead the closing stages belonged to Yip. With seven seconds left, he completed a ‘Gordie Howe hat-trick’, adding to his assist on Lajunen’s goal by scoring into the empty net then getting into a fight with Dmitry Shulenin. An eventful end to an eventful evening – and a winning start to our mini-tour of Europe.