Getting ready in Riga

This year, Red Star gathered in Riga to prepare for its third KHL campaign. Our players arrived in the Latvian capital from all over the world in time for the annual two-day medical checks, plus team-building activities and the first pre-season camp of the year. 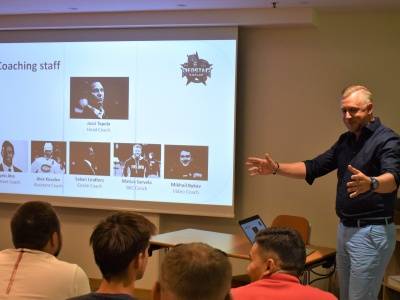 For the training staff, the work started even earlier. Club president Raitis Pilsetnieks kicked things off with a meeting to welcome the new members of our off-ice team and outlined the work that needed doing before the players arrived. The discussion didn’t take long, and it was soon full steam ahead to prepare for the coming season.

The pre-season plan looks something like this:
July 16 – fly to the Czech Republic and set up a training camp in Liberec until the end of the month. Towards the end of this session, we’ll have warm-up games against Pirati Chomutov and our Eastern Conference rival Avtomobilist Yekaterinburg.
July 31 – onwards to the Black Sea where we’ll take part in the Sochi Hockey Open. From Aug. 3-8, Red Star will be up against some testing pre-season opposition: HC Sochi, SKA, Lokomotiv and Russia’s ‘B’ Team. Once the competition is over, our guys are in no hurry to leave the delights of Russia’s riviera. We’ll have another week of training and preparation there before our next pre-season tournament.
August 16-28 – from the Russian riviera to the Venice of the North, the team heads to St. Petersburg. After another week of training, Red Star will play in the Puchkov Memorial tournament. It’s a swift reacquaintance with SKA and Sochi, plus two more games against Severstal and Jokerit.

The game with the Finns is a dress rehearsal for our first KHL game of the season: the campaign begins for us in Helsinki on Sep. 3. As a result, we’ll be leaving Petersburg on August 28 and going direct to the Finnish capital to make those final preparations for the opening night.

As it happens, the second game of our season also takes us right back to familiar surroundings: on September 5 we’re heading back to Sochi! Back to the Black Sea, and up against HC Sochi for the third time in a month. Then we start the long journey home, stopping off in Moscow to play Spartak and touching down in Magnitogorsk to meet our most familiar KHL foe, Metallurg.

In two seasons, we’ve played 11 games against Magnitka, compared with nine each against our closest geographical rivals Admiral and Amur. By the end of the regular season, though, that will all change. We have just two scheduled games against Metallurg but face five meetings with both our Far Eastern neighbors. And then we’ll see what the playoffs bring.

All that’s some way in the future. Right now, our new-look roster is just starting its journey together. But even in the height of summer, the ice is ready – and we’re all looking forward to the adventures yet to come!