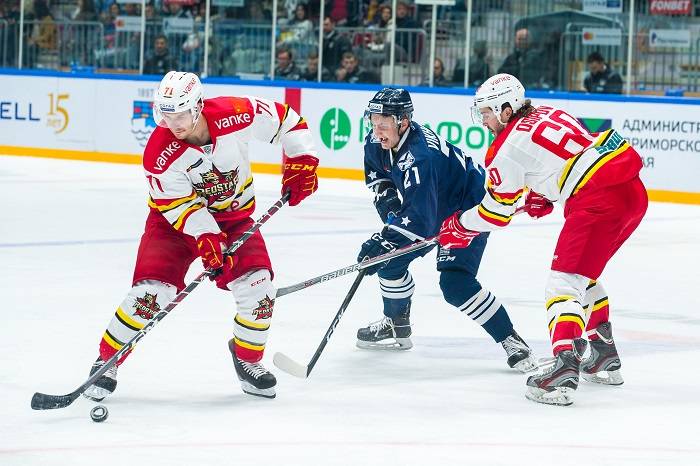 For the final game of Red Star’s road trip, Mathew Maione and Brandon DeFazio returned to the line-up, while Simon Hrubec replaced Jeremy Smith in goal as Curt Fraser continues to swap his goalies game on game.

After so long on the road, the Dragons could be forgiven for a bit of fatigue. However, the early stages of the game proved the opposite, with Kunlun making a bright start to the game. The first big chance came out of nothing when recent signing Denis Osipov fired in an opportunistic shot from center ice and home goalie Juho Olkinuora struggled to turn the effort onto his post.

There was another presentable opportunity when Red Star got on the power play midway through the session and DeFazio’s backhand feed put Olli Palola through on the net. However, the battle between Finnish forward and Finnish goalie went the way of the shot-stopper. Kunlun had the edge in those opening exchanges, but Admiral also had chances. Adam Almqvist went close on a home power play and Konstantin Glazachev almost marked his 500th KHL appearance with the opening goal when he got clear of the defense following a dump-and-chase. On this occasion, though, Jake Chelios got back to muscle the experienced forward out of a clear shot at Hrubec.

However, the game changed at the start of the second period when Admiral got in front. Former Red Star forward Martin Bakos came back to haunt his old club, combining behind the net with Vladimir Butuzov and emerging to bamboozle Trevor Murphy before flipping a backhander to the top shelf within a minute of the restart. After that, our guys had to dig deep to kill a 3-on-5 situation and then struggled to regain the momentum they had enjoyed in the opening frame.

The game was still very much alive going into the third period, even if our Dragons had a goal to retrieve. The task got more arduous when Oleg Lomako burst down the left channel and flashed his shot across the face of goal to beat Hrubec and double the home lead, but Red Star was not going to give up. After allowing a goal to one of our former players, Kunlun responded midway through the frame with a goal involving an ex-Admiral man. Osipov, who played in Vladivostok in the club’s inaugural 2013/14 season, exchanged passes with Ethan Werek as our forward moved into the offensive zone; Werek duly rifled home a shot from the right-hand spot to make it a one-goal game.

The pressure continued, with Red Star outshooting the host two-fold in the final stanza but failing to get the decisive play that could beat Olkinuora. The Finn produced big saves to deny Adam Cracknell and Brandon Yip in the closing stages as Admiral hung on for a narrow victory.

So finally our long voyage around Russia is at an end. Next week sees Kunlun play its first games of the season in Beijing, starting with a back-to-back match-up against Neftekhimik on Wednesday and Thursday. Hopefully, there’ll be no place like home.