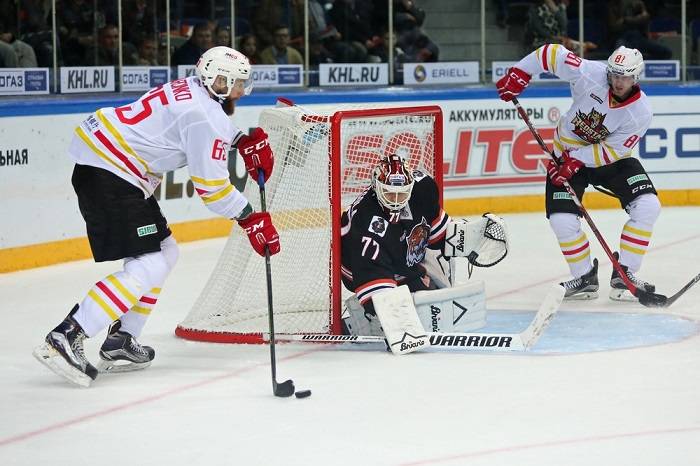 It’s been a long journey – six games on the road already, circling around the map of Russia – but the voyage is coming to an end. This week brings two games at our nearest neighbors, with trips to Amur and Admiral wrapping up an eight-game road trip. And there are plenty of reasons for optimism ahead of the action, with Curt Fraser and his team lifted by two wins in the last three games and especially by an impressive 5-2 success at Barys last time out.

Russian defenseman Denis Osipov completed his move to Red Star over the weekend. The 32-year-old has almost 350 games in the KHL and has played for the likes of Metallurg and Lokomotiv before spending last season with Dinamo Minsk. He  could make his debut in Khabarovsk.

Last season: We had mixed fortunes against Amur last season. In five meetings, Red Star won once (3-1 on December 17), lost twice in overtime and suffered a 2-7 hammering. That game apart, the scorelines were usually close: three of the five match-ups finished 3-2.

Familiar faces: Two former Dragons could be involved on Thursday. Czech defenseman Ondrej Vitasek played 43 games here last season, scoring 16 (3+13) points. Forward Igor Velichkin was part of our first season and has since spent three seasons on the fringes of the Amur roster.

Background: It took Amur a long time to win a game this season, but the Tigers have picked up two wins in the last three to move off the foot of the table. Indeed, it would be wrong to read too much into that nine-game losing streak, given that every encounter ended as a one-goal game. Alexander Gulyavtsev’s team is hard-working, has a resilient defense but possibly lacks a cutting edge in front of goal. The dangermen this season have been the Ushenin twins, Vladislav and Vyacheslav. Together they have 9 (4+5) points and they combined for the opener in Saturday’s 3-0 win over Sibir.

Last season: Historically, there’s little to choose between these rivals and last season saw the teams alternating wins and losses. Over five games, Red Star won three – culminating in a memorable 6-3 triumph in February when we played our first game at the Shougang Arena in Beijing. Olli Palola collected three points that day and the Finn is back on the goal trail this season after potting his first of the campaign at Barys.

Background: It’s early in the season, but this already has the look of a key clash in the race for the top eight. After 12 games Admiral has 12 points, Red Star is trailing by just one. Both teams, at the time of writing, are showing a bit of form with two wins from last three. A tight game is in prospect, and the result could tell us a lot about both teams’ chances of returning to the playoffs.

Admiral reshuffled its personnel over the summer, and three new arrivals are starting to make an impact. Defensemen Shawn Lalonde and Adam Almqvist have three points each from the last five games, as does forward Markus Ljungh. The latter pair made a big impact on Monday as Admiral scored twice in the last two minutes to save the game at home to Sibir; Almqvist went on to pot the winner in a shoot-out.