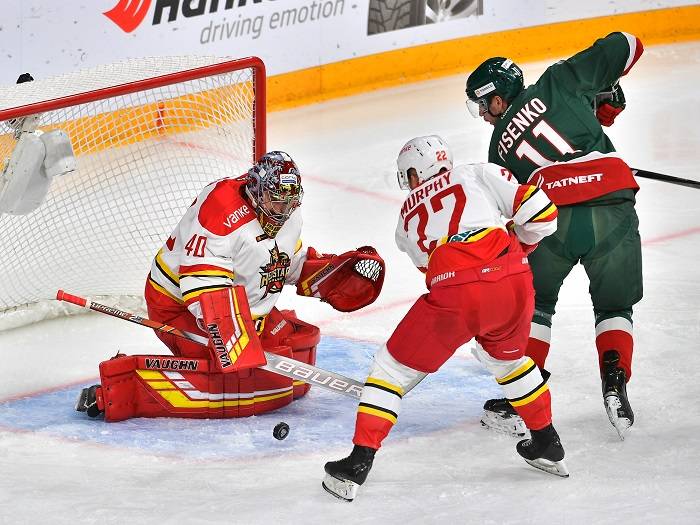 Saturday began with news that Denis Osipov was the latest recruit to the Dragons’ cause. The defenseman played last season with Dinamo Minsk and has 343 KHL appearances for a host of clubs, including Metallurg and Lokomotiv.

The 32-year-old was not available to join the team immediately for the game in Kazan, so once again Red Star lined up with just six defensemen. It’s a strategy adopted throughout the season and – unfortunately – today it left our blue line somewhat overexposed.

The final scoreline tells a big part of the story: a 0-5 loss makes it hard to pick out any positives. However, it’s worth noting that the game remained alive until the closing minutes and it was two goals in the last five minutes that punished our tiring team and made the final score look that much worse.

That’s not to ignore the fact that, after a competitive first period, the home team enjoyed far more control of the game than anyone associated with Red Star would have wished. The opening frame saw Ak Bars enjoy plenty of possession but struggle to convert it into genuine danger. It wasn’t until the 19th minute that Vyacheslav Osnovin managed to open the scoring and Red Star’s players were performing strongly to keep shots at Jeremy Smith to a minimum.

Even in the middle frame, the path of the game could have been changed. Andrei Pedan increased the Ak Bars lead, but there was a glorious chance to recover some ground when we won a penalty shot in the 33rd minute. Nikita Lyamkin was penalized for hooking, but the duel between Tyler Wong and Timur Bilyalov went the way of the home team when Wong’s shot went wide of the target.

With it went Red Star’s hopes of taking something from the game. A power play goal from Matt Frattin made it 3-0 early in the third and there was a painful sting in the tale to come. Danis Zaripov added a fourth late on, moving to three points for the game and 326 in the KHL for Ak Bars – a new club record. Then in the last seconds Artyom Valeyev got his first career goal to complete the rout. Kunlun was limited to just 18 shots and, all in all, this was a day to forget. We go again on Monday in Kazakhstan, looking to bounce back with a better result against Barys.