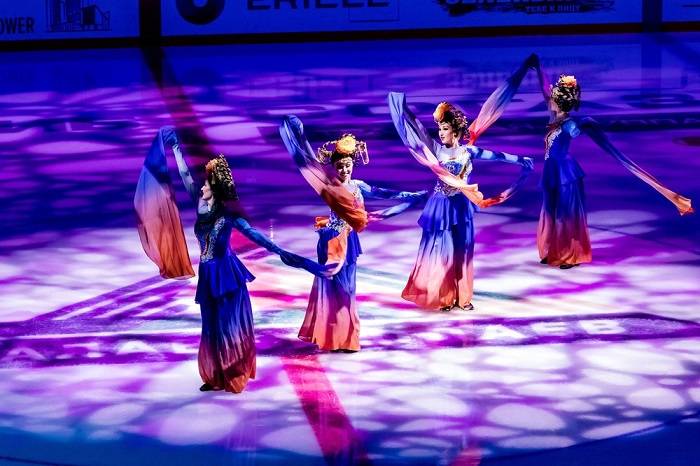 For Kunlun Red Star, 2018 ends on the road. There are two games to play, at Salavat Yulaev on Friday and then at playoff rival Traktor on Sunday. The road trip could see a debut for new signing Sam Lofquist, the latest new face among our defense this season. Five players are currently on the injured list – D-men Marc-Andre Gragnani, Blake Parlett and Krisjanis Redlihs, plus forwards Cory Kane and Johan Sundstrom.

Last time out: Salavat Yulaev’s 3-2 win in Shanghai in November 2017 is the Ufa team’s only victory in four meetings with Red Star.

Familiar faces: Oskars Bartulis finished last season with Salavat Yulaev, making 10 regular season appearances and four more in the playoffs. He scored one assist in that spell. A year earlier, Tomas Mertl’s season followed a similar pattern when he arrived in Ufa from Medvescak. Mertl, too, played 10 regular season games, with five more in the playoffs. He had 5 (4+1) points.

Background: Ufa has been a happy hunting ground for Kunlun in its KHL history so far. Our two visits to the capital of Bashkiria have brought a 5-4 shoot-out win in our debut season, followed by a 2-1 success last August thanks to a last-gasp goal from Brandon De Fazio. Much has changed since then, with Salavat Yulaev struggling to meet the high expectations placed on a team generally felt to be one of the top clubs in Russian hockey. Currently placed sixth in the Eastern Conference, Nikolai Tsulygin’s team has been unpredictable all season and the last five games reflects that: two wins, two losses in overtime and a regulation defeat.

Danger men: Forward and club captain Anton Burdasov is injured and the leading scorer this season, Linus Omark, has just four goals to go with his 32 assists. In recent games, defenseman Zakhar Arzamastsev has stepped up to lead the team’s scoring, something that highlights a lack of consistency in Ufa this season. Goalie Juha Metsola, well known from several appearances against us with Amur, is another whose form is vital to Ufa’s chances at the moment.

Last time out: Earlier this season, Red Star won 2-0 at home to Traktor. Justin Fontaine and Patrik Lundh got the goals, Alexander Lazushin stopped 25 shots. Since then, German Titov has been replaced as Traktor’s head coach by Alexei Tertyshny.

Familiar faces: Tertyshny, of course, was Vladimir Yurzinov Jr’s assistant on the Red Star bench in our inaugural season. Jonas Enlund played eight games for us in that campaign but the Finnish forward failed to score a single point in that time.

Background: The end of the year brings a playoff showdown. Traktor is one place and four points ahead of Red Star at the time of writing. Lifted by a run of four wins in its last six games, with the losses coming on the road at Avtomobilist and Ak Bars, Traktor has shrugged off a slow start to the season to emerge as a real contender for a top-eight finish. The arrival of Canadian forward Christian Thomas has been something of a catalyst for the team’s leap up the table: in 16 games since he joined the club, Traktor has won nine. Thomas himself has contributed 10 (5+5) points to the cause.

Danger men: Thomas has led the way in recent weeks, while long-serving import Paul Szczechura has been a consistent scorer over several seasons in Chelyabinsk. Youngster Vitaly Kravtsov lit up last season’s playoffs and was the #9 pick in the NHL draft; on his day, the teenage forward can be devastating.