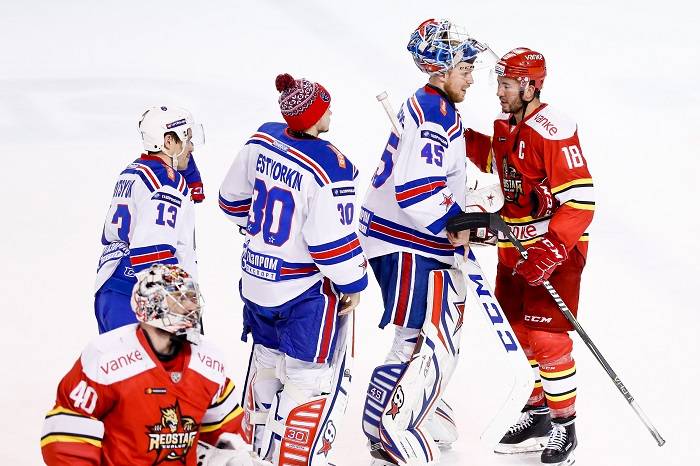 Throughout the season, Red Star has raised its game in clashes against the KHL’s top clubs – and this encounter was no exception. Shrugging off the after effects of a run of just one win in 10 games, our guys fully matched themselves against one of the strongest teams in the league. Nobody could have argued if Kunlun left the game with points as well as plaudits after a courageous and competitive display.

For the visitor, the contrast between this game and the previous one could hardly have been greater. On Saturday, SKA suited up in front of almost 70,000 fans for its Western Conference showdown against CSKA. In Shanghai, our Feiyang Arena is rather more modest – generating that kind of passion for hockey here in China is very much a long-term project – but once again our team produced a performance that shows why it is very much a part of the KHL.

In the words of head coach Jussi Tapola: “I always tell our players that we have everything we need to win this type of game. But it’s a mindset question: we can’t go out and be afraid of losing, on the contrary we need to focus on how to win.”

The early exchanges were tight. SKA, as expected, had more of the puck in the first period but struggled to turn that into clear scoring chances. Emerging after the intermission, Red Star then produced a sensation, jumping to a 2-0 lead. First, a turnover in our zone enabled Tobias Viklund to play a defense-splitting pass up the ice for Brandon Yip. Through one-on-one with our former goalie Magnus Hellberg, Yip confidently dispatched the chance and Red Star had a shock lead. Hellberg, by the way, was chosen ahead of Igor Shestyorkin today precisely because of the Swede’s Kunlun connections.

Three minutes later, that lead was doubled. Patrik Lundh brought the puck out of defense and fed Joonas Jarvinen. The Finnish defenseman moved into the SKA zone and shot early, surprising Hellberg to make it 2-0. Suddenly, the impossible dream seemed very much alive.

However, the opposition brought a roster stuffed full of quality. It’s not often a team can name a #1 NHL draft pick as the 13th forward, but that was Nail Yakupov’s fate in this game. The former Oilers prospect is somewhat upstaged in Petersburg by the likes of Olympic hero Nikita Gusev, and it was Gusev who got SKA back into this game in the 28th minute. That was his 300th point in regular season action. Vladislav Gavrikov tied the game midway through the frame and it remained level at the second intermission.

The next goal was always likely to be crucial and, not for the first time this season, Red Star’s willingness to take penalties proved costly. Although the team killed SKA’s first power play of the period, the momentum moved decisively towards the visitor and Andrei Kuzmenko got the go-ahead goal soon after the teams returned to full strength. Another power play brought another goal: Gusev among the assists as Nikolai Prokhorkin got his third helper of the game and David Rundblad opened a 4-2 lead.

It still wasn’t over. The last minute saw two more tallies, one in each net, with Oskars Bartulis getting our consolation goal. It was another brave Kunlun effort, but it came up short.

The game concludes a home series that has been hugely frustrating. One win in five games is a poor return, and the results have seen us drop outside of the playoff places. However, there are positives as well: against Dynamo and SKA the team got into winning positions, only to be thwarted by two of the big names of Russian hockey. Against Vityaz, too, Red Star held a lead but was edged out by an in-form opponent. And the team’s progress has been noted by those outside the club – SKA and team Russia head coach Ilya Vorobyov agreed that Kunlun was much improved from the team that lost 1-5 in Petersburg earlier in the season.

Tapola added: “Of course we’re disappointed with our results but today we saw many positives. We started the game strongly and even went 2-0 up against a powerful opponent. We rose to the challenge. But in the end, SKA showed why it is one of the big teams in Russian hockey. We worked, we battled, but by the third period we had no strength left, we took those penalties and SKA demonstrated once again that they have the skills to create their chances and take them.”

Next it’s back on the road for games against playoff rival Traktor and Salavat Yulaev before the New Year break.