At the end of the first phase of the season, prior to the international break, it was clear that Red Star was ready for some time to regroup. The opening two months of the campaign had been a roller-coaster; the net result was a placing in the thick of the race for a playoff place. Now, it was time to build on that foundation and lift the team’s performance to the next level and get into that top eight.

Step one on that journey took us to Novosibirsk. Sibir, struggling at the foot of the Eastern Conference, had bolstered its roster with an old friend of ours, Gilbert Brule, but was still suffering with a five-game losing streak. The action in Siberia turned out to be something of a microcosm of our season so far: ups and downs a-plenty, but a finish that gives grounds for optimism and lifts us back into eighth place.

Sibir wasn’t the only team with new faces. Red Star gave debuts to Oskars Bartulis and Tobias Viklund. The latter is back with us for a second spell, having previously featured in our inaugural season; Bartulis, who has reached the KHL playoffs with teams as varied as Donbass, Barys, Admiral and Salavat Yulaev, joined after a brief spell at Traktor. Both marked their debuts with points, while head coach Jussi Tapola admitted that he was happy to have some scope for rotation on the blue line at last after wretched luck with injuries left us exposed in defense.

First, though, came a hammerblow. Just 65 seconds into the game, the home team edged in front thanks to a Maxim Kazakov goal. Worse soon followed, with Red Star having a goal disallowed after a video review. The next big action saw Sibir goalie Danny Taylor pull off a huge save to deny … With 10 minutes gone, it was tempting to feel that this was not destined to be Kunlun’s night.

That all changed on Red Star’s first power play of the game. Viklund showed what he can bring to the PP, quarterbacking the play from the blue line before unleashing a center point shot that bounced around the crease before Michael Latta stuffed it home. 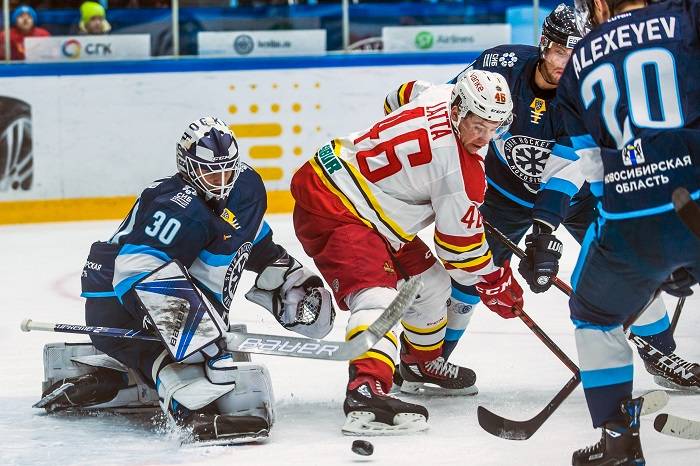 Special teams would be a feature of the game. For Red Star, the PK proved significant. Sibir had six power play chances in the first two periods as indiscipline fractured Kunlun’s play. However, brave defense ensured that only one of those opportunities resulted in a goal. Inevitably, perhaps, Brule delivered a reminder of his qualities to his former team when he restored the home lead late in the second period.

Those penalties came as a result of the team’s stated desire to play with intensity and aggression from the start: a long pause prior to the game, and a week’s break after tonight’s action, meant that everyone was ready to let rip on the opposition. In the final stanza, though, that intensity crystalized into scoring power. Three goals in the final 10 minutes swung the game decisively in our favor to secure a much-needed victory.

First came Bartulis, still making a contribution 50 minutes into his first game for eight months. Barely a minute later, we saw the game winner as Tomas Mertl’s pass found Justin Fontain in the right-hand circle and he unleashed a shot across the face of Danny Taylor and into the top corner. Finally, Johan Sundstrom wrapped it up with an empty-net effort just before the hooter. Red Star scored three goals from seven shots in the final frame, but that was a tribute to careful offense creating clear-cut scoring chances from our time in the Sibir zone. The home team, especially when chasing the game, fired in more shots but spent less time in dangerous positions; our defense did a fine job keeping the opposition to the outside.

Now it’s back to China, having remained in Moscow Region during the international break. Our next action, on Nov. 21, marks the start of a five-game home stand. Dinamo Minsk comes to Shanghai as we look for quick revenge for a 1-4 loss in Belarus at the start of the month.