Defeat in Belarus was a tough pill to swallow. There wasn’t a lot wrong with the team’s performance but it was one of those days when the puck just would not go in the net. Defenseman Marc-Andre Gragnani, one of two ex-Dinamo players on our roster, had a simple explanation for what made the difference: “Minsk has got Enroth and he’s a great goalie,” our man said when asked about Red Star’s failure to get the lead its first-period performance deserved. 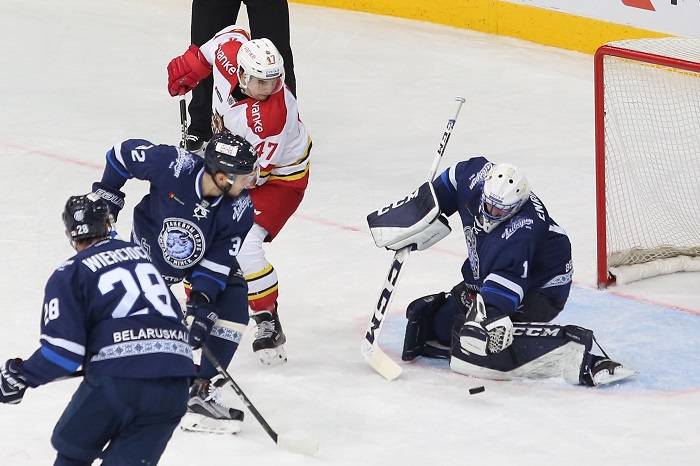 And there was little doubt that the opening frame was very much dominated by Kunlun. However, there was no way to the net. Sometimes it was solid Dinamo defense, keeping our forwards to the outside while Enroth hoovered up the long-range efforts. Sometimes it was wild shooting, putting the puck off target as the pressure to extend the home goalie increased. Sometimes, it was sheer bad luck, as in the incident when Tomas Mertl rushed into the danger zone but the puck squirmed away from Brandon Yip when he was poised for the decisive touch. Even when Minsk offered up a defensive error, coughing up the puck behind the net for Olli Palola to feed Cory Kane on the slot, Enroth found the answer and frustrated our forwards.

There was more frustration to come. Luke Lockhart got the puck in the net, only for the goal to be ruled out for use of the hand. And eventually, the inevitable happened. After failing to take advantage of its early supremacy, Red Star got stung on the counter. The second period saw a more energetic Dinamo performance and, although the game was still even, the home team managed to take its chances when they came. Two goals in two minutes of intense pressure around Barry Brust’s net changed the whole tone of the game. Evgeny Lisovets opened the scoring with a power play goal. The Belarusians kept up the pressure, and not even a Red Star time out could stem the flow. Quinton Howden doubled the lead, and the game was slipping away.

Then came another problem, as identified by assistant coach Alexander Kovalev. When chasing the game, Red Star tends to take risks. When those risks don’t come off, opponents at this level tend to punish them. The third period brought two further Dinamo goals, either side of a Taylor Beck effort with eight minutes left. Beck wrapped up a well-worked move from a face-off in neutral territory, firing home a wrist shot from the right-hand circle to give hope of a recovery. Alas, it was not to be this time: Denis Kazionov added a fourth for the host and there was no way back.

The gruelling schedule continues with a game at Vityaz on Saturday. The team then stays in the Moscow Region to face Avangard on Monday before the international break and a chance to recover from those long intercontinental flights.