Our latest visit to ‘local’ rival Admiral was settled by Brandon Yip’s late goal – but in truth, this was a game that we could have wrapped up earlier than the 59th minute.

Despite the signing of experienced defenseman Krijanis Redlihs on Monday, there wasn’t time for the Latvian to get to Vladivostok for today’s game. He’ll be part of the plans when our next extended road trip gets underway at the end of the week – and ironically, he could make his Red Star debut in his homeland at Dinamo Riga. For today, though, Tomas Mertl continued in his role as an improvized defenseman.

A lack of players was not a problem unique to Kunlun, however. Admiral had seen Stepan Zakharchuk banned for 15 games, while Vasily Streltsov was also suspended for this match-up. The reorganization on the home side possibly helped us in the opening exchanges: certainly, Greg Squires relished the space that opened up for him in the eighth minute as he took Patrik Lundh’s pass and swept through the Admiral zone to the net. His initial shot looped up off goalie Anton Krasotkin’s pads, but the puck still found its way over the line. 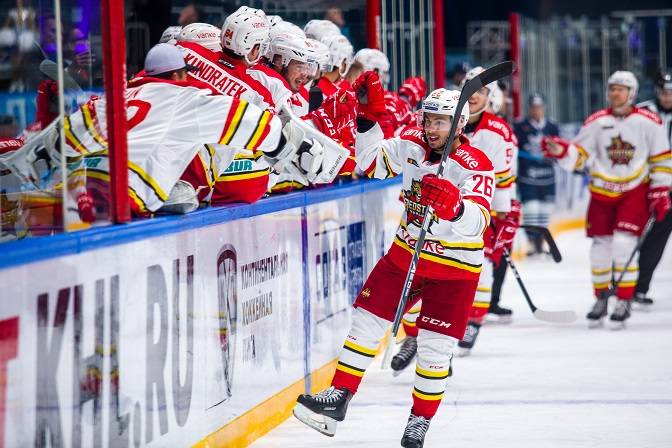 That didn’t exactly usher in a period of Red Star dominance: the game remained evenly-fought and chances were few and far between. Only late in the opening frame did Krasotkin find himself under heavy pressure, while Alexander Lazushin dealt with the sporadic threats posed by our host at the other end.

In the middle frame, the action opened up. There was more incident at both ends of the ice … and another big moment from Squires as he created a second goal of the day. On the counter-attack, his feed across the face of Krasotkin’s net sat invitingly for Marc-Andre Gragnani to shoot home. Admiral made a fruitless appeal for goalie interference, but the video showed that the goal was good. 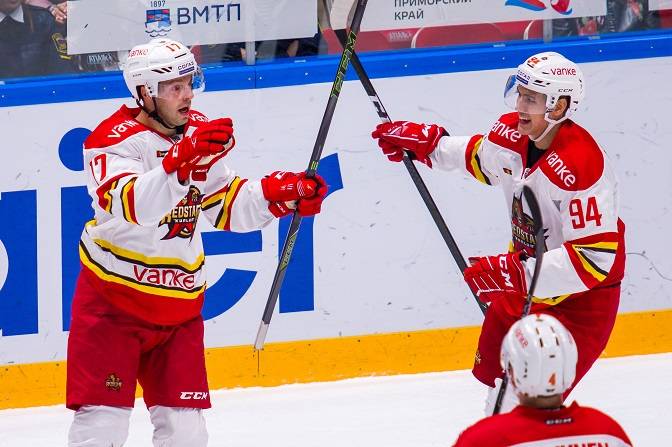 For Squires, that made for his best game so far in Kunlun’s colors: a goal and an assist, having previously mustered a solitary strike against Metallurg earlier in the campaign. Gragnani, meanwhile, picked up his second of the season, maintaining the reputation he established in Minsk as a productive blue-liner.

Thus, with 25 minutes to play, the course seemed set fair to sink Admiral’s fleet and pick up another win. But there were to be choppy waters ahead. Konstantin Glazachev grabbed a goal back for the Sailors within a couple of minutes. Early in the third period, Sergei Konkov tied the scores at 2-2. The home team had the wind in its sails, and threatened to cruise off with the game. Lazushin had to be on top of his game between the piping and our defense – short of numbers as it is at present – needed to stand firm. 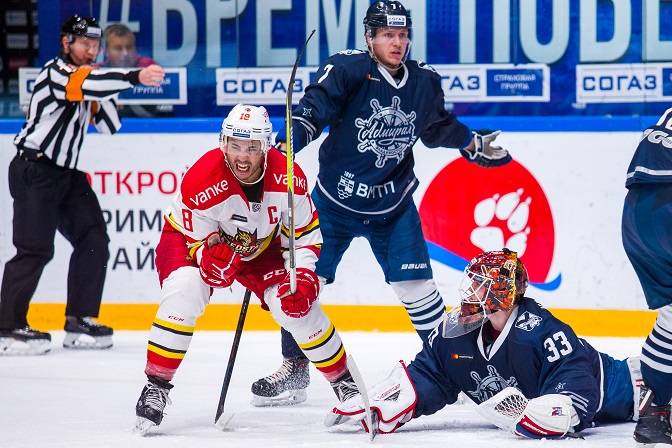 Then, in the closing moments, came another sea change. A penalty on Admiral’s Vojtech Polak handed Red Star a chance. The power play clicked: Taylor Beck to Marty St. Pierre at the back door, a pass back across the face of goal to Yip and …. the winner! With 82 seconds left to play, Red Star had sealed a victory forged through the team’s character and resilience.

The result means Red Star has now taken some reward for five of its last seven games – winning four of those five. Moreover, ahead of the late game at Neftekhimik, our guys are just one point outside of the playoff spots. Europe awaits … and it’s a trip full of opportunity.