Red Star was unable to put the brakes on Avtomobilist’s winning start to the season – but gave the KHL leader plenty to think about before falling in the third period.

Given that the team started the game with just four recognized defensemen on the roster – Brayden Jaw and Tomas Mertl took on duties on the blue line to bring the total up to six – it was hardly surprising that this proved to be a stern test. Avtomobilist, despite an injury to forward Anatoly Golyshev, boasts some serious fire-power: in-form Nigel Dawes on a seven-game productive streak, French international Stephane da Costa, former Gagarin Cup winner Francis Pare and pacey American Dan Sexton offer a challenge to any defense, let alone one as short on numbers as ours.

In the early stages, therefore, offense was the best form of defense open to Kunlun. In the first period Red Star had twice as many shots as the visitor and got a reward after 12 minutes when Taylor Beck found Cory Kane and his shot from between the hash marks beat Jakub Kovar to open the scoring.

Nikita Tryamkin tied the scores early in the middle frame but within seconds Red Star held the lead once again. Tomas Mertl brought the puck out of the corner and fed it to Michael Latta on the slot. The Canadian’s first effort was blocked, but his persistence paid off as he swatted the rebound into the net to record his first goal for the club. After 26 minutes, Red Star was still ahead.

In the end, though, the strain of playing with a short-benched roster took its toll. Midway through the game, that Dawes-Sexton-da Costa combination saw the former Barys forward tie the scores. Then, in the third period, Avtomobilist showed just why it is out in front this season, potting three unanswered tallies to complete its 15th successive victory with Pare collected a goal and an assist. 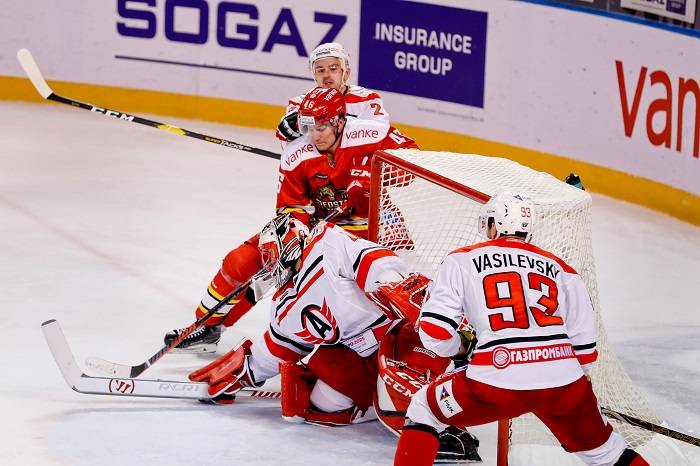 Head coach Jussi Tapola was not looking for excuses after the game. Asked about the need to use forwards in defensive roles, he said: “Yes, we have problems. We’re missing two defensemen so today some guys had to play on defense. For me, they did well, and I don’t think it’s so important which position you play. It’s a team game. Whether you’re a D-man or a forward, you have to be ready to do whatever is asked of you at any time. As far as I’m concerned, we managed to do that OK.”

As for the rest of the game, the Finn admitted that his team had learned from taking on the early-season leader. “It’s no accident that Avtomobilist is out in front and they taught us a valuable lesson today,” he added. “Sure, we did well in the first half of the game, but what marks the top teams in this league is that they know when they need to add something and they also know that they can step it up in the third period.”

Sunday’s game brought an end to our latest home stand. Our next game is on Monday at Admiral, then we head back to Europe for match-ups with Dinamo Riga, Slovan and CSKA.