The international break brought some changes to Red Star’s roster … but there was no immediate change of luck as the team returned to action on Tuesday. Not for the first time, our guys battled hard and arguably deserved better than a shoot-out defeat; once again, though, the unforgiving stats show another loss. The visit of Dynamo marked a debut for Jaakko Rissanen, recently arrived from Vityaz in a deal that saw Matias Myttynen move in the other direction. It also saw Sergei Peretyagin back in the line-up after he returned to the club. Geoff Kinrade made way for him on the blue line. Goalie Magnus Hellberg, whose heroics for Sweden in a shut-out victory over Canada last week pushed him firmly into contention for an Olympic call-up, resumed between the piping, although he was replaced with Alexander Skrynnik for the decisive shoot-out. Young Russian rookie did really well in his debut KHL appearance stopping three of four shots but this still proved to be not enough.

Prior to that, however, Hellberg produced 27 saves in a typically solid display for the Dragons. Unfortunately for him, and the rest of the team, his opposite number Alexander Yeryomenko was even more impressive. Not content with 44 saves in regulation, as Kunlun dominated play but struggled to turn pressure into goals, he also won all five of his duels in the shoot-out. Mikhail Varnakov was the only man to succeed in the extras, snapping a 1-1 tie to give Dynamo the verdict. Regulation time saw the teams share two goals, and leave Red Star cursing its uneven power play once again. Dynamo’s opener, in the eighth minute, showed how it should be done with Juusso Hietanen converting his team’s only PP chance of the first stanza. Kunlun, meanwhile, huffed and puffed. Three numerical advantages came and went in the first two periods, before the third saw Dynamo forced to play 3-on-5 for almost two minutes. The breakthrough remained stubbornly elusive. Finally, with 10 minutes to play – and the teams at equal strength – Red Star broke through. Brandon Yip’s pass found Cory Kane well-placed in front of the net and this time there was no chance for Yeryomenko as the forward zinged a wrister onto the top shelf for his ninth goal of the season. Kunlun continued to dominate the play, with Yeryomenko the busier goalie as the game reached its conclusion. But Dynamo’s one-time Russian international – part of the roster that went to Sochi in 2014 – showed the kind of class that twice made him a Gagarin Cup winner in Blue-and-White. Come the shoot-out, he produced saves to deny Kane, Wojtek Wolski and Jesse Blacker then saw Lucas Lessio and Gilbert Brule miss the target as Varnakov went away with the game-winner. 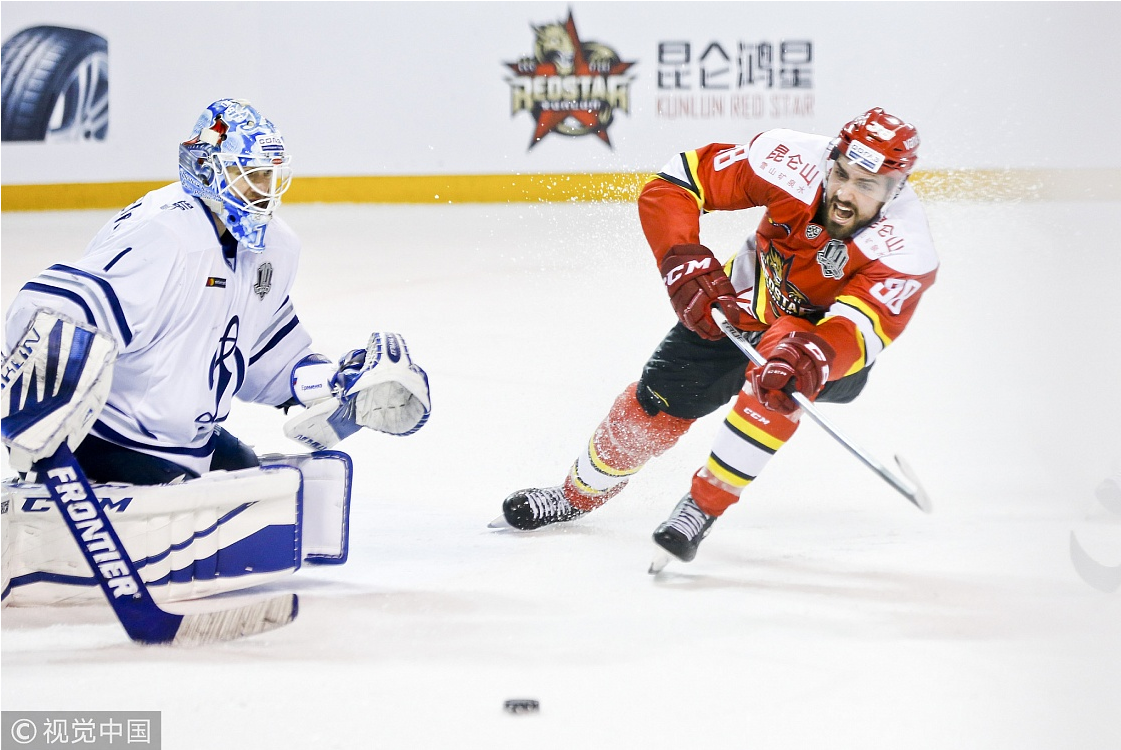 Red Star is back in action on Thursday when Dinamo Minsk arrives in Shanghai. With both teams just outside the playoff places in their respective conferences, it promises to be another battling encounter.